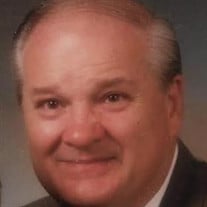 William Bruce Jones, 83, passed away peacefully on June 27, 2019 in Mesa, Arizona. Bruce was born on October 14, 1935 in Virden, New Mexico to Harry Payne Jones and Florence Cardon. Bruce married Claudette Roy on August 22, 1964 and they shared 54 wonderful, fun filled years together. He worked for the Internal Revenue Service for 30 years before retiring in 1990. Bruce enjoyed spending time with his family and he loved to travel. Long road trips with the whole family in the station wagon were his favorite vacations. He had visited all 50 states. He was a faithful servant of our Heavenly Father. He served over 25 years as a Bishop, Bishopric counselor, Stake High Councilman, and an ordinance worker at the Mesa Temple. Bruce is survived by his loving wife, Claudette, and his children, Michael Jones, Larry Jones (Sharon), Bill Jones (Janell), Kathleen Claridge (David), and James Jones (Sara). He is also survived by his brothers, Laurence Jones (Ellen), Daniel Jones (Phyllis), and Steven Jones (Phyllis). He has 29 grandchildren and 32 great-grandchildren. He is preceded in death by his son, David Jones, his parents, and his brothers, Louis Jones and Harry Jones.

The family of William Bruce Jones created this Life Tributes page to make it easy to share your memories.

Send flowers to the Jones family.