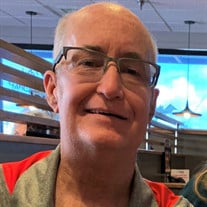 William (“Bill”) Ernest Dow Jr., 54, died Monday, October 5, 2020 peacefully at home after battling kidney disease for the last 8 years. He leaves his brother, Jeff; sister in law, Stephanie; his nephews, Jacob and Nicholas; his niece, Gabrielle; his uncles, David and Larry; his aunt Susie, his cousins: Danielle, Tony, Leanne, and Langdon along with many close friends. Bill was born and raised in Southern California, the son of William Sr. and Cynthia (Shine) Dow. Even though he had lived all over the country, he always saw California as home. Bill attended Dobson High School in Mesa, AZ where he was known for his love of cars, art, and being very social. He often reminisced about all the good times he had working at the Brunswick bowling alley and the friends he made there. He always stayed in touch with his Mustang classmates attending all reunions and get togethers. GO Mustangs!!!! After high school Bill worked in paint sales in Prescott, Arizona for some time and eventually moved back to where he had always considered home, Southern California. While in California he worked for Dunn Edwards in sales. Upon his parent’s retirement, he moved with them to sunny Florida. In Florida he worked as a cashier for Dollar Tree and then at JC Penney’s in the jewelry department. Missing their family Bill Sr, Cynthia, and Bill all moved back to Arizona. Bill transferred his employment to the JC Penny located in Arizona and quickly moved up to jewelry manager. His love for jewelry and repour with his customers and employees alike made him a valued employee. In 2009 Bill suffered an aneurism which led to a lengthy hospital stay and a long road to recovery. Bill, as always, was incredibly positive and vowed to beat this setback which he eventually did. He never made full recovery but was able to enjoy a wonderful life with a little help. He would easily discuss his plight with anyone willing to learn more about brain injury and even joined a group to help others. With the passing of Bill Sr., Cynthia and Bill moved to Randolph, New York, where Cynthia had grown up. While in New York, Bill’s kidneys began to fail and he was eventually placed on dialysis. Bill lived there until his mother, Cynthia, passed in 2015. He then moved back to Arizona to live with his brother Jeff, with whom he lived until his passing. Once back in Arizona he switched to a different kind of dialysis which allowed him to work again. He found a job at Tuesday Morning as a cashier which he loved. He also worked hard to get on the kidney transplant list and most importantly began to drive again. This was a major accomplishment for him! He even purchased his own car, a Fiat 500C. Bill had a strong love for his cars and the Fiat was his crowned jewel. Through the years he owned a lowered truck, Fiero, MR2 and Scion. Bill was an avid collector of autographs, loved to bowl, fish, and go to the casino. If you were looking for him on a Friday or Saturday night, he would be eating at JC’s Steakhouse and listening to live music. Saturday night with the Harry McGraw Band was always his favorite. Those of you knew Bill either from high school, any of his jobs, any of the places he lived, or just as a friend, knew he would always keep in touch be it Facebook, handwritten letters, or texts. He truly was a social butterfly. He was an instant friend to all he met and his optimism about life despite the challenges he faced was contagious. He will be deeply missed. In lieu of flowers the family requests a donation to be made in Bill’s honor to the National Kidney Foundation of Arizona https://azkidney.org/node/142 Services will be held at Sun Valley Community Church Tempe Location located at 6101 S River Dr. Tempe, AZ 85283 on Sunday November 8th at 1pm We ask that all attendees please wear a mask and practice social distancing as best they can. In addition, we will be offering a remote viewing option that can be accessed via the link below: Click here to view memorial service "LIVE" 11-8-2020 at 1pm https://evt.live/ethingtonproductions/william-dow

The family of William "Bill" Ernest Dow Jr. created this Life Tributes page to make it easy to share your memories.

Send flowers to the Dow family.