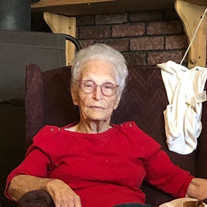 On the afternoon of Tuesday January 4th Violet Allen (n&#8217;ee DeShane) passed away joining her beloved husband George, parents and daughter in the eternities. She was surrounded by family and many pets that will miss her presence dearly.... View Obituary & Service Information

The family of Violet Allen created this Life Tributes page to make it easy to share your memories.

Send flowers to the Allen family.