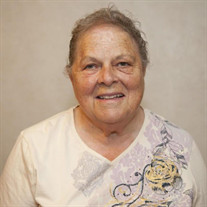 Verdell Turley Button, born March 9, 1937, to Charles Herman Turley and Elizabeth Ann Hunt Turley in Woodruff, Arizona. Her life of hard work, love of family, faith in God, thirst for learning and service to others continued the pioneer heritage of the ancestors with whom she was reunited on December 2, 2021, when she passed from this world to the next. Verdell was the last child born to her parents. She had two sisters: Alma Turley Heaton and Elaine Turley Rogers and three brothers: Charles, Norman, and Frank. Two major events impacted her early family life – the death of her brother Charles M. in World War II in Italy and a farming accident that crippled her father Charles H. for the rest of his life. To support the family during this trying time, Verdell’s mother Ann had to go to work in Holbrook leaving Verdell to spend much quiet time at home alone. Her quiet, independent, and reserved personality probably developed during these formative years, as did her love for reading. After high school, Verdell moved to Flagstaff to live with her brother Frank and his wife Teddie Val. There she met Roger Bruce Button, a student at then Arizona State Teachers College (now Northern Arizona University). They fell in love and were married in the Mesa Arizona Temple of the Church of Jesus Christ of Latter-day Saints on May 31, 1957. After graduation, Roger went to work for the US Treasury Department where he had a long career. They lived in Los Angeles, Scottsdale, Mesa, Holbrook, and Flagstaff before finally settling in Lehi (now Mesa), Arizona. They had four children, Charles Leon Button, Kandee Button McKellar, Trulee Ann Button Carpenter and Fonree Button Godfrey. They have 27 grandchildren and 62 greatgrandchildren. While her children were young, Verdell completed her bachelor’s degree in Elementary Education from Arizona State University and went to work as a teacher in Mesa Public Schools. Later she taught in Holbrook, Flagstaff and Central Phoenix. She earned her master’s degree from Northern Arizona University, with a specialty in reading education. Verdell instilled in her children her love for education, reading and literature. Some of their fondest memories are of her reading bed-time stories to them. Verdell was pioneer-strong and hard working. She loved to garden and preserve fruits and vegetables. She and Roger planted orchards and harvested apples, pears, peaches, oranges, grapefruit, lemons, figs and pecans. Anyone who visited her left with an armful of the fruits of her labors. She also loved to bake and make candy, a talent she inherited from her mother. Nothing made her happier than feeding those that she loved. Compassion and sacrifice were hallmark characteristics of Verdell. Both her mother-in-law Susannah Dobson Button and her mother Ann Turley survived their husbands. Verdell cared for each of them in her home for several years when they became unable to live alone. Her mother Ann suffered strokes and was completely bedridden and incapacitated for the last three years of her life. Verdell tenderly cared for her until she passed away in Verdell and Roger’s home. In their later years, Roger and Verdell served together as full-time missionaries for many years – two separate stints at the Mesa Family History Library, a mission to the Los Angeles Family History Center, a mission to Quito, Ecuador (Employment and Self-Reliance) and finally as the directors of the Mesa Humanitarian Center at the Inter-Stake Center on Horne and 2nd Avenue. Verdell had a deep love for her family heritage. This blossomed into a life-long passion for family history and temple work. Verdell was resilient and long suffering – pressing on despite her challenges. She suffered from vision loss and arthritis, treating these as annoyances without letting them slow her down. Eventually she had to have knee replacement surgery. But true to character she decided to have them both done at once to get taken care of and be able to move on. In 2013 Verdell was confronted with her greatest physical and emotional challenge – a traumatic brain injury from a fall. Slowly and painfully, she struggled to recover her ability to speak and to walk. Her personality was affected, and her roles were reversed. Instead of her being the one caring for others, she became the recipient of care and service. Most of that care came from her eternal companion Roger, but in January 2021 he passed away. Since that time her children and grandchildren have had the privilege of putting into practice her life-long example of love, service and self-denial. She is very beloved by her family and friends. Ever the teacher, she has inculcated her legacy of hard work, love of God and family, quest for learning, and passion for service into her posterity. She will be missed. Join Zoom Meeting https://us02web.zoom.us/j/88515733786 Meeting ID: 885 1573 3786

The family of Verdell Turley Button created this Life Tributes page to make it easy to share your memories.

Send flowers to the Button family.