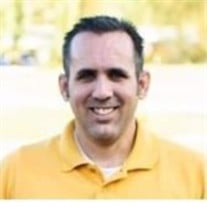 Tyler Wayne Tieman, beloved husband, father, son, brother and uncle, peacefully passed away, on October 27, 2020. Although he lived less than the average life span, he did not live an average life. Tyler was born in Mesa, Arizona on December 30, 1983 to Paul Tieman and Leilene Peterson. Tyler was the third of six children with three brothers and two sisters. He graduated from Mesa High School, Class of 2002. He then served a mission for The Church of Jesus Christ of Latter-Day Saints in the Veracruz Mexico Mission. Upon his return home he followed his passion of gardening and became a gardener at the Mesa Arizona Temple grounds. Where he met the love of his life Emily Adamson. They were married on June 28th, 2008 in the Mesa Arizona Temple. Tyler was a natural born healer, and helper to human and animal. He was always trying to be a friend to those in need and serve wherever he could. This led him to receive a Bachelor’s Degree in Pre-Veterinary from ASU on May 10th, 2011 and then a Bachelor’s in Nursing on December 17th, 2017 from Arizona College of Nursing. Following which he became a Registered Nurse. Tyler and Emily have seven beautiful daughters, Brooklynn Nadine, Madison Grace, Mikayla Jean, Makenzie Elise, Katelynn Marie, Ashlynn Maretta, and Evelynn Kristi. Their first daughter passed away at birth. Tyler was a believer in the saying that “Real Men, Make Girls!” He is now reunited with his oldest daughter Brooklynn Nadine. Tyler’s wife and daughters were his greatest treasures in life, followed by his family, friends then reptiles. These treasures helped make him into the man all who knew him, loved, respected, and looked up too. He was such a kind, compassionate, selfless man to everyone he met. He was funny and made the best out of every situation. After leaving him, you always felt loved, uplifted and a smile on your face even during all of his health trials this last year. His exemplary life was one of tireless service to God, family, friends and community. He is survived by his wife and six daughters, mother, father and five siblings. His viewing will take place on Thursday, November 5th from 5-7pm and Friday, November 6th from 9-9:30am at the LDS Church Building at 2339 S. Crismon Road, Mesa, AZ 85209. All are welcome. Due to Covid-19 the funeral will unfortunately be open by invitation only. For those who personally receive the invitation, it will be at the same address as the viewing and will proceed at 10am on November 6th. The funeral services will be broadcasted via Youtube.

Tyler Wayne Tieman, beloved husband, father, son, brother and uncle, peacefully passed away, on October 27, 2020. Although he lived less than the average life span, he did not live an average life. Tyler was born in Mesa, Arizona on December... View Obituary & Service Information

The family of Tyler Wayne Tieman created this Life Tributes page to make it easy to share your memories.

Send flowers to the Tieman family.