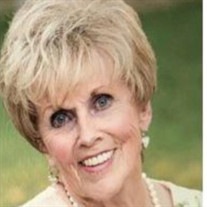 Susan LeVon Wright Woolsey of Gilbert, Arizona passed away peacefully on Sunday January 17, 2021 at the age of 79. She was born July 2, 1941 to William G. Wright (deceased) and Virginia Pickens Wright (also deceased). She was the second of five... View Obituary & Service Information

The family of Susan Levon Wright Woolsey created this Life Tributes page to make it easy to share your memories.