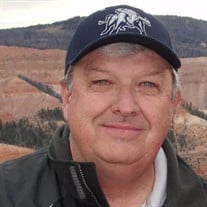 Stuart Wendell Buck passed away in Phoenix, Arizona, on February 3, 2022. He was born August 18, 1956, in Richfield, Utah, to Melva Maxine Harris and Rulon Wendell Buck. Stuart was the fifth child out of eight: Sherm, Kathleen (Glenn Voth), Sherleen (Denis Cooper), Rosalie, Tom (Connie), Lamont (Karlene) and Maxine (Curtis Maughan). Stuart spent the early part of his youth in Junction, Utah. He was a curious child, with a big grin, who liked taking old things apart just to see how they worked and loved going fishing with his grandpa Everett Harris who fed him liverwurst on saltines. His family later moved to Hyrum, Utah, where he attended Cache County schools and graduated from Skyview High School. As a teenager, he was given a responsibility to milk the family cows before and after school. He was not fond of cows but learned the value of completing a job because it had to be done, not because he wanted to do it. Stuart served a mission for The Church of Jesus Christ of Latter-day Saints in Scotland where he learned to love the people, the beautiful country and developed a testimony of Jesus Christ. Stuart returned from his mission and met Sandra Heyrend, they were married in the Logan, Utah, Temple on July 2, 1981. They were blessed with four children: Carver (Amanda), Tanner, McCoy (Bekah) and Carly. Stuart loved his 12 grandchildren: Kade, Kallee, Sidda, Maizey, Rulon, Cash, Freya, Ryden, Kendal, Mylee, Jase and Jane. All the family could recite his three principles to live by: Be Honest, Do Your Part and Live Up to Your Potential. In 1985 they moved to Phoenix, Arizona, where Stuart worked for Bio Huma Netics in Chandler, Arizona, and developed a fascination for plant physiology in agriculture and turf grass. He started his own company Spectron Lab and provided plant and soil testing and consulting services to golf courses and country clubs across the United States. Stuart loved being in the field, talking, sharing ideas and working with superintendents in the golf industry. Stuart served in many leadership positions in the Boy Scout of America program, often doubling as the camp cook. He also served The Church of Jesus Christ of Latter-day Saints in Sunday School, Young Men's Presidency, Bishopric and High Council. Stuart enjoyed nature and spent time RVing, boating, fishing, motorcycle riding and driving around town with his Blue Heeler buddies, Butch and Sundance. No formal services will be held in Arizona. A graveside service In Hyrum, Utah, will be announced at a later date. We set up an email account for any memories or stories that friends & family have. Please send those to: [email protected] We have also had some people ask about sending flowers, but in lieu of that, we have set up a venmo to help with some of the expenses if anyone wants to help. www.venmo.com/u/stubuckmemorial

The family of Stuart Wendell Buck created this Life Tributes page to make it easy to share your memories.

Stuart Wendell Buck passed away in Phoenix, Arizona, on February...

Send flowers to the Buck family.