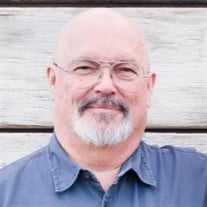 Steven Roy Nelson passed away August 17, 2021 at 68 years old. Born in Bay City, Michigan on September 20, 1952 by his parents Robert Nelson and Joan Hoffman. He attended high school at Handy High where he played lead guitar in a local band and graduated in 1971. Shortly after graduation he left Michigan and moved to Arizona and became a police officer for the city of Chandler, Gilbert, and Mesa. In 1976 he welcomed his first daughter Rebecca Hassell from a previous marriage. In 1980 he married Martha Jo Miller in the Mesa, Arizona Temple and would go on to have four children. After his time as a police officer, he specialized in Information Technology where he spent the remainder of his career. He enjoyed music, football, Diet Pepsi, scouting, astronomy, and spending time with family and friends. His greatest joy was seeing his wife and children succeed. He is survived by his wife Martha and his five children: Rebecca Hassell (Chris Hassell), Adam Nelson (Jessica Nelson), Sara Haws (Chris “Buddy” Haws), Brooke Whimpey (Greg Whimpey), Morgan Nelson (Britania Nelson), and his 17 grandchildren. Visitation services will be held Friday, August 27th from 6:00 pm - 8:00 pm at the Church of Jesus Christ of Latter-day Saints 6942 E Brown Rd, Mesa, AZ 85207. Funeral services will be held Saturday, August 28th from 9:00 am - 10:00 am at the Church of Jesus Christ of Latter-day Saints 6942 E Brown Rd, Mesa, AZ 85207. He will be laid to rest following the funeral service in the City of Mesa Cemetery. Flowers for the funeral can be purchased here.

The family of Steven Roy Nelson created this Life Tributes page to make it easy to share your memories.

Send flowers to the Nelson family.