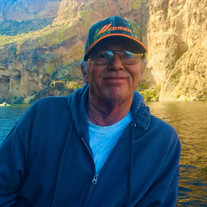 Steve was born on August 13, 1958 in Encino, California to his parents Barbara and Chuck. His parent divorced when he was only 2 years old, and his mother raised him on her own. He was always a hard worker which started at a young age. As a kid he sold flowers on the side of freeway off ramps and had a paper route. He also built fences and worked at a mattress factory. He moved on to the Material Handling Industry, he held several positions including forklift mechanic, Customer Service Rep., Railcar Mover Salesman, as well as owning his own Railcar Mover Company. He earned numerous sales awards from WT Billiard, which included annual trips to Hawaii. After the economy collapsed in 2008, he was forced to close his business and start over. The family moved to Arizona and Steve became a long-haul truck driver. Being a truck driver can be hard and he did miss being away from his family for such long periods of time. He ended up visiting 46 states in less than a year before he was able to find a local job hauling powder cement. His family was so happy to have him back home. They all started over and bought a beautiful home in Queen Creek, Arizona. Over his lifetime he has resided in the Southern California and Arizona. He grew up in the San Fernando Valley, he lived in Whittier, then Chino Hills until 1994, next they built a new home in the high desert and lived there until 2010, and finally settled in Queen Creek, Arizona. By the late 1980’s he had met his future wife, Terri. They married in 1989 in Anaheim and have enjoyed the most loving partnership for the past 32 years. Terri shared that as a husband he was hard working, devoted, honest, and yes, at times a little stubborn, and she could not have loved him more and would not have changed a thing. Together they brought their son Jonathan into the world. Steve also has an older son Steven Jr. from his first marriage, they have all come together to form a strong family unit. He was the absolute best dad in the world and loved his boys more than anything. The best way to describe Steve is that he was a great guy. He was handsome, he had striking blue eyes, and he always had great smile. He was fun, kind, friendly, and competitive. He was a man’s man, but he also got along great with women. He would like to be remember as a good, honest, and decent man that loved his family and always worked hard to take care of them. He always prided himself on his punctuality, as you all know he was never late and was always the first one to arrive. He succeeded in life due to his humility, generosity, and his big heart. Steve’s passions and interests were pure and well defined. He lived an active life, and he loved all sports. When he was a boy, he was an excellent baseball player. He always made the All-Star team, the coaches loved him, and he was a slugger. He later coached Little League baseball and soccer for his boys. He was an animal guy, he especially loved dogs including his loyal Golden Retriever Annie. He had a lifelong interest in Slot Cars, he raced them as a boy, he built the best slot car motors, he won numerous slot car championships, and later he introduced his sons to his favorite hobby – as a result, “Team Forsyth” was finally created. He was also a NASCAR fan. Steve just enjoyed life and loved having fun. He like to play games including poker, craps, blackjack, and Candy Crush. When it came to TV, he loved watching Friends, The Big Bang Theory, Gold Rush, Pawn Stars, and any show focusing of car racing. He did appreciate a good meal, but he was a picky eater. Italian food was his favorite and he liked the basics including a good cup of coffee, pepperoni pizza, tacos, and delicious chocolate chip cookies. Steve was a great fisherman, including deep sea fishing, lake, and stream fishing. Travel was a passion he shared with is loved ones. They have experienced great trips to Italy, Finland, and England. As well as fun family vacations: including Lake Sabrina for fishing; San Diego where they enjoyed eating dinner in Old Town, riding the carousel at the Sea Port Village, and walking on the beach at Coronado; adventures in the Sierras; as well as visiting Pismo Beach, Monterey, Yosemite National Park, and the state of Arizona. Steve is survived by many loving family members and friends including his wife Terri, his sons Steven Jr. and Jonathan, his mother in-law Sandra, father in-law Larry, his sister in-law Kelly, his nephew Jacob, his cousins Ed, Carla, Cheryl, and Jason, his stepsister Tammy, his newly discovered half-brother Dana, and his loyal Golden Retriever Annie who misses him dearly. While Steve was in the hospital, he missed Annie so much. When he came home for his last night on earth, Annie never left his side, she was with him when he passed. Steve is predeceased by his parents Barbara and Chuck.

Steve was born on August 13, 1958 in Encino, California to his parents Barbara and Chuck. His parent divorced when he was only 2 years old, and his mother raised him on her own. He was always a hard worker which started at a young age. As... View Obituary & Service Information

The family of Steven Edward Forsyth created this Life Tributes page to make it easy to share your memories.

Send flowers to the Forsyth family.