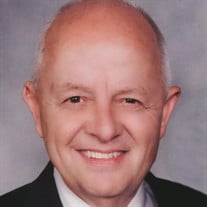 Stephen Edwin Phelps, our most beloved husband, Dad, Papa, uncle, brother, and friend completed his earthly mission on September 9, 2021 after living a life dedicated to the Lord and his family, deeply touching all who knew him. Stephen was born on August 5,1942 to Wayne Ellsworth Phelps and Mary Zoe Hill Phelps in Mesa, Arizona. He was proud to be a fourth generation son of Mesa pioneers as well as a resident of Gilbert for the latter half of his life--both were so special to him. Stephen graduated from Mesa High School in 1960, then went on to serve a mission in the North British Mission from 1960-1963. Here he came to love both the people and the country of England. It was during his time at ASU as a Pre-Law/Accounting major that he met and started dating the beautiful Carolei Ferrin. The two were sealed in the Mesa, Arizona Temple and started their forever family on December 19, 1964. His love and devotion to his sweet bride were always evident. He adored her (and she him), and expressed his love for her at every opportunity. They would go on to have 10 children: Kent (Wendy), Starlyn (Preston) Peterson, Crissie (Stan) Roberts, James (Jolene), Merilana (Corey) Kennedy, Melody (Matt) Peterson, Jared (Tara), Cindy (Brandon) Whatcott, Tara (James) Huish, and Nathan (Alicia). After completing his undergraduate degree at ASU and his law degree at UofA, Stephen and Carolei moved back to Mesa where he began his career. Most know him as an exceptional estate planning attorney who had the unique ability to treat every client as he would a family member. He was highly knowledgeable in his field, and always practiced law with the utmost wisdom, integrity, and compassion. Before starting his law practice that would span 30 years, he operated Phelps Building Materials in downtown Mesa and owned his own music studio where he lived his dream of teaching piano and organ lessons for a living. As a faithful member of The Church of Jesus Christ of Latter-Day Saints, Stephen served in many capacities and touched many lives. Some of his best friendships were formed while serving. Bishop of Mesa 40th Ward, Stake Presidency member, high councilor, and gospel doctrine teacher were just a few of his callings in the church. But none brought him more joy than that of Gilbert 6th Ward Organist. His testimony of and love for our Savior Jesus Christ were never more deeply conveyed or felt than when he was at the organ. Many missionaries were sent off with his soul-stirring renditions of “Called to Serve” and “The Spirit of God,” and anyone listening couldn’t help but be moved. He played for many sacred occasions and truly had an incomparable gift that will leave a lasting impression upon the many thousands who were blessed to witness it. Stephen and Carolei’s 10 children, their spouses, 49 grandchildren, and 8 great-grandchildren are his greatest joy and proudest accomplishment. Watching them spend time together at his home or at the family cabin in Alpine was his version of Heaven on Earth. He was never shy about expressing his love for them, and they will continue to feel that love throughout their lives. Each one of them cherish their time with him and love him so dearly. He was and always will be our example of Christlike love, rock-solid faith, courageous endurance, devotion to God and family, strengthening of the feeble knees, and too many other qualities to name. We love him infinitely--even 300+++. He is survived by his eternal sweetheart, Carolei, his posterity, brothers John (Carolynn) and Russell, and countless nieces, nephews, cousins, and friends who will mourn his passing. He is preceded in death by his brother Irwin Phelps and sister Denna (Richard) Millett. In typical Stephen fashion, he requested an ice cream social in lieu of a viewing to celebrate his life and greet old friends. The family will be in nice, casual dress. It will be held Thursday, September 16, 2021 from 6:00-8:00pm at the Highland West Stake Center located at 1010 S. Recker Rd, Gilbert, AZ 85296. The funeral services will be at 2:00 pm on Friday, September 17, 2021, also located at the Highland West Stake Center, where Stephen said he’d like “tears to be at a minimum.” :) The broadcast link will be: http://tiny.cc/Phelps

Stephen Edwin Phelps, our most beloved husband, Dad, Papa, uncle, brother, and friend completed his earthly mission on September 9, 2021 after living a life dedicated to the Lord and his family, deeply touching all who knew him. Stephen was... View Obituary & Service Information

The family of Stephen Edwin Phelps created this Life Tributes page to make it easy to share your memories.

Send flowers to the Phelps family.