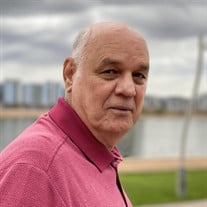 Our beloved husband, father, grandfather and friend, Stephen William Lewis, passed away in Mesa, Arizona on October 3, 2021. He was born in Ogden, Utah on October 28, 1946. He spent his youth in Roy, Utah where he participated in a variety of sports and choir. He graduated from Ogden High School in 1964 and joined the Marine Corps Reserve in 1967, where he served 5 1/2 years. After the Marines, he joined the Air Force and served 4 1/2 years. During his time in the Air Force he was stationed at Luke Air Force Base, Keflavik Air Station in Iceland, and Williams Air Force Base. Following the Air Force, Steve lived in Mesa, Arizona where he attended Mesa Community College. He attended Arizona State University and graduated with a degree in Criminal Justice in 1981. He later pursued his Masters of Education in Counseling, graduating from Northern Arizona University in 2001. During this time in his life, Steve was also serving our country in the Arizona Air National Guard. He served from 1981 to 2002, retiring as a Master Sergeant. He also deployed in 1991 to serve in Operation Desert Storm, stationed at Moron Air Base in Spain. He received the Arizona Distinguished Service Medal for outstanding achievement in implementing a highly productive repair program for aircraft bombers. After his retirement from military service, he worked for the state of Arizona as a Case Manager for adults with disabilities He was extremely effective and regularly received unprecedented high evaluations. He had a soft heart for his clients and found ways to connect with and serve them. He also counseled juvenile offenders in navigating the court system. Steve met Janet Mecham in 1976. Knowing she was the one, he proposed six weeks later. They were married in the Mesa, Arizona Temple in 1977 and lived in Tempe, Arizona ever since. They were blessed with three children: Kristi (Rich), Nathan and Casey (Jessie). As a father, he instilled the values of hard work, respect, honor, sense of humor and faith in his children. He enjoyed spending time with, playing with and loving his six amazing grandchildren: Nikolas, Maddie, Chase, William, Sophie and Cooper. His children, children-in-law and grandchildren will miss him immensely. Steve and Janet loved to travel, serve others, laugh, play sports and simply spend time together. He was an amazing, devoted, kind and loving spouse to Janet every day. Each was known to the other by the nickname 'Bear'. An avid sports fan, Steve enjoyed the challenge that came with maintaining everlasting hope as an Arizona and BYU sports fan. He was a skilled woodworker and loved sharing his creative products with those he loved. He loved cars and was particularly fond of Porsche, owning three throughout his life. A highlight for him was visiting the Porsche Museum in Stuttgart, Germany. He loved fishing and spending time outdoors, especially Hawley Lake, Arizona with family. He enjoyed running and participated in numerous half-marathon and 10k races. He was known for collecting coins, bear figurines, petrified wood and interesting rocks during his travels around the world. Known by many as a gentle giant, he was very kind and skilled in connecting with anyone. He was quietly compassionate to those struggling in life. People enjoyed being around him because of his unique and subtle sense of humor. He had a quick mind and an amazing memory. He leaves a wonderful legacy and will be missed beyond expression by those that knew him. Services will be held on Saturday, October 9th at 2707 South College Avenue, Tempe, Arizona 85282. The viewing will be from 11:00 am to 11:45 am. The funeral services will begin at 12:00 pm. The burial will be at the Mesa Cemetery at 2:00 pm. To view the service remotely please visit https://www.youtube.com/channel/UCwCyZI4AR_FnaOIEALj9Gvw

Our beloved husband, father, grandfather and friend, Stephen William Lewis, passed away in Mesa, Arizona on October 3, 2021. He was born in Ogden, Utah on October 28, 1946. He spent his youth in Roy, Utah where he participated in a variety... View Obituary & Service Information

The family of Stephen William Lewis created this Life Tributes page to make it easy to share your memories.

Send flowers to the Lewis family.