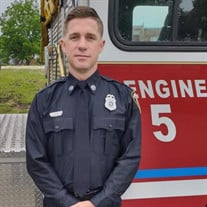 A winding river is the course of a man’s life. It has its own ups and downs, twists and turns. Other tributaries join its flow, sometimes breaking off only to rejoin it farther along its path. If the life is a fortunate one, other rivers may stem from it. Ryan Jones’s life, wide and deep, touched many others along its path. Born December 13th, 1991, Ryan was the only son to Troy Lane Jones and Dayna Dalley Jones and the second of four children. He grew up a member of the Church of Jesus Christ of Latter-Day Saints and worked hard on the family’s citrus farm in Mesa, Arizona. A wrestler and football player at Mountain View High School, he additionally earned his Eagle Scout from the Boy Scouts of America. None of these accomplishments are small feats. Together, they represent exceptional achievement. A parent could not be prouder of a son’s accomplishments, and Ryan generated a pride that would echo throughout his life. He loved flying and building RC planes with his father. He loved using his talents as a woodworker to make gifts for others, some of his favorites being an airplane shelf and a wooden rattle for his son. He was a lively dancer, touching the lives of countless friends that he met in the two-step and swing dancing communities of Arizona. He had many deep passions. Bent to work with his hands he became a plumber. He was known in both Arizona and Mississippi for offering his talents to friends and family who needed help renovating their homes. While running his own business in Arizona, he renovated million-dollar homes and did so beautifully. When he passed, he was actively working toward earning his journeyman’s license. Ryan’s life stream began to rush as he met the love of his life in February of 2017. He swung Ashley Cheyenne Lacy Trow from the dance floor into adventure, and down a marriage aisle on March 24th, 2018. Their combined journeys led them to Hattiesburg, Mississippi, where Ryan achieved his dream of becoming a firefighter, graduating class 19-01, and serving the community from Hattiesburg Fire Station #9. He was awaiting his promotion to Relief Driver next week. Ryan and Ashley’s rivers branched beautifully in October of 2019 with the birth of a son, Lucas Lane Jones. Another bend in the waterway, another dream come true for Ryan, proud to have become a loving father. Soon his woodworking skills were put to use building toys and furnishings for Lucas—the portrait of a dedicated father, always ready to help and serve. Ryan touched many lives as a son, brother, teammate, friend, husband, brother in duty, and father. The ripples of any life are endless, and the stories of Ryan’s life, as told by those he touched and cared for, will continue. The river Ryan lived will now sweep into his son, Lucas, and be recalled in the memories of all who knew and loved him. Ryan is survived by his son Lucas Lane Jones and wife Ashley Cheyenne Trow Jones; his parents Troy Lane Jones and Dayna Lynn Dalley Jones; older sister Kaylynn Kanaga and brother in-law Dallin Kanaga; younger sister Holly Slade, brother in-law Levi Slade and nephew Jacob Boone Slade; and younger sister Janaye Pace and brother in-law Michael Pace. He will be sorely missed and cherished by surviving in-law family, grandparents, aunts and uncles, and cousins. A memorial service will be held on Saturday, May 7 2022 at The Church of Jesus Christ of Latter-day Saints 830 East Lehi Road in Mesa, Arizona 85203. There will be a viewing from 10:00 to 10:50 AM with funeral services to begin at 11:00 AM. The family will proceed to the gravesite at 1:30 PM. Additional Memorial Services will be held in Hattiesburg, Mississippi, to be announced at a later date. The family asks that in lieu of flowers, donations be made to Ryan’s surviving wife and son through a GoFundMe account: https://gofund.me/10bde772. Donations could also be made to your local fire department or affiliated non-profit agency.

A winding river is the course of a man&#8217;s life. It has its own ups and downs, twists and turns. Other tributaries join its flow, sometimes breaking off only to rejoin it farther along its path. If the life is a fortunate one, other rivers... View Obituary & Service Information

The family of Ryan Lane Jones created this Life Tributes page to make it easy to share your memories.

A winding river is the course of a man’s life. It has its own...

Send flowers to the Jones family.