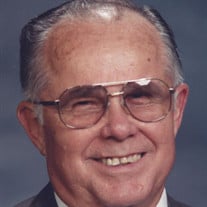 Roy Alvin McClellan, beloved son, brother, uncle, husband, father, and grandfather passed away on 14 August 2020 of natural causes. Roy was born on 14 May,1930 in Mesa, Arizona to William Ray McClellan and Lydia Jane Hancock. He was raised in a loving home with his parents and his older sister Betty Jane. Roy graduated from Mesa High School in 1948 and served a mission for The Church of Jesus Christ of Latter-day Saints in Brazil from 1950 to 1953. He was married to Lenora Lea Enloe on 5 March 1954 in the Mesa Arizona Temple. Dad graduated from Arizona State University and was commissioned an officer in the US Air Force. Roy and Lenora are the parents of 7 children - Richard (Sue Webb), Denise (Ken) Jenkins, Sharon (Zurl) Thornock, Don (Beth Hale), Mike (Margaret Gonzalez), Dave (Andrea Smith) and Pam (Jim) Brown. They are grandparents to 34 and great-grandparents to 84 with 4 more due in the near future. Dad served 22 years as a navigator and later an intelligence officer; his assignments took him to Texas, California, Utah, Japan, Colorado, Arkansas, Thailand, Louisiana, and Nebraska. After retiring they came home to Mesa and Dad worked as Employment Center Manager for The Church’s local Welfare Office. Mom and Dad served 3 missions together: an emergency call to Florida after Hurricane Andrew, as Family History Missionaries here in Mesa, and then a Family history mission in Sao Paolo, Brazil from 1996 to 1998. Dad’s greatest love was for his Savior, Jesus Christ and for his family. He also found joy in serving others; from his days as a newspaper carrier for the Arizona Republic, to his years of employment, to his decades of service in the Boy Scouts of America; he was always wanting to serve others. In the church he served as Bishop of the Hayti, Missouri Ward during the 1960’s and beyond that served in many roles within the church and community. In his later years his service turned to the Mesa Arizona Temple where he served for over 27 years. He leaves a legacy of love for God, family, and neighbor. Services will be a private, family celebration on Thursday, 20 August 2020. A family viewing will be held from 6 to 7 pm on Wednesday, August 19th followed by a viewing for friends and neighbors from 7 to 8 pm at 2152 E. Adobe St, Mesa, AZ 85213. Restrictions related to the pandemic are in effect.

Roy Alvin McClellan, beloved son, brother, uncle, husband, father, and grandfather passed away on 14 August 2020 of natural causes. Roy was born on 14 May,1930 in Mesa, Arizona to William Ray McClellan and Lydia Jane Hancock. He was raised in... View Obituary & Service Information

The family of Roy Alvin McClellan created this Life Tributes page to make it easy to share your memories.

Send flowers to the McClellan family.