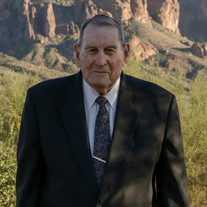 Ronald E. Ashcroft of Mesa, Arizona passed away peacefully on January 8, 2021 at the age of 91. He was born in Eagar, Arizona on July 23, 1929 to Paris Ira Ashcroft and Rachel Butler Ashcroft. He was the sixth of seven children. He spent his early childhood years in Eagar in a home his father built. Unfortunately, the ideal childhood ended when he lost his mother to pneumonia at the tender age of 12 and we rejoice that he is having a tender reunion with her now. In high school Ronald played football and basketball for Round Valley High School. During Ronald’s senior year, his chemistry teacher let him use his airplane to take flying lessons. As a result, flying airplanes became a major part of his life. Ronald attended Arizona State University for two years until he was called to serve a two-year mission for the Church of Jesus Christ of Latter-day Saints in the East Central States Mission from November 1949-November 1951. Following his mission, he met Eva Miller on a blind date and later they married on June 2, 1952 in the Mesa Temple. Ronald continued his education at the University of Utah, graduating with a BA in Chemical Engineering. Ronald and Eva have seven children, 26 grandchildren and currently 41 great grandchildren. Ronald served in the Church in three bishoprics and as a bishop. In 1998 he was called as the Stake Patriarch for the Mesa South Stake. He also served as a temple ordinance worker and a temple sealer. In Ronald’s retirement years, he and Eva enjoyed several vacations traveling to many countries throughout the world. Ronald is survived by his sister Mary and brothers Henry and Rulon; five of his children Ted(Yoko), Craig(Kelley), Tom, Lisa(Brad) and Curtis(Katherine). He was preceded in death by sisters Maureen, Fern, and Bonnie and his son Ronald(Beverly) and daughter Debra. Additionally, he was preceded in death by his beloved Eva and his dear second wife Ruth. Ronald lived a full and faithful life and will be missed. Funeral services for Ronald E. Ashcroft will be held on: Wednesday January 13, 2021 at The Church of Jesus Christ of Latter-day Saints, 940 East Southern, Mesa, AZ. 9am to 10am- Closed casket gathering for friends and family. 10am to 11:15am -Funeral service Interment at Mountain View Cemetery, 7900 East Main Street, Mesa, AZ 85207

Ronald E. Ashcroft of Mesa, Arizona passed away peacefully on January 8, 2021 at the age of 91. He was born in Eagar, Arizona on July 23, 1929 to Paris Ira Ashcroft and Rachel Butler Ashcroft. He was the sixth of seven children. He spent his... View Obituary & Service Information

The family of Ronald E. Ashcroft created this Life Tributes page to make it easy to share your memories.

Ronald E. Ashcroft of Mesa, Arizona passed away peacefully on...

Send flowers to the Ashcroft family.