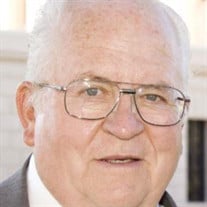 After loving and serving his family on earth for 83 years, Roger Bruce Button joined his family in the spirit world on January 22, 2021. Verdell Turley Button, his wife of 63 years, continues here to teach and bless their posterity of four children - Charles Leon (Marilyn) Button, Kandee Button (John)McKellar, Trulee Ann Button (Jay) Carpenter, Fonree Button (Sidney) Godfrey and 26 grandchildren and 60 greatgrandchildren. Roger was born in Kanab, Utah on August 21, 1937 to Ralph M. and Susannah Dobson Button, but he was raised seven miles south in Fredonia, Arizona. He had a happy, adventuresome and humorous early life, the details of which have become legendary and mythical because of his wonderful story-telling. He left Fredonia after high school to go to Arizona State College (NAU) in Flagstaff, Arizona, but he retained a life-long love of his origins in Fredonia. While in college he met and married his sweetheart, Verdell Turley in the Mesa Arizona Temple. She was a small town girl from Woodruff, Arizona. Roger and Verdell were both the babies of their families and received much support and help from their families as they got started out in life. They would later repeat this tradition by generously helping their children and grandchildren throughout the years. Roger graduated with a bachelors degree in Accounting and went to work with the US Treasury Department where he worked for over 30 years until retirement. His work took his family to Los Angeles, Mesa, Holbrook and Flagstaff before they finally settled in Lehi, Arizona which was later annexed into Mesa. Never ones to be idle, Roger and Verdell also started several business ventures including fruit orchards, tomato greenhouses, a child day-care center, houseboat rentals, and residential real estate rentals. Everything they did was done to create opportunities to teach their children and interact with family and friends. Roger began his first stake mission as a teenager and continued throughout his life to be faithful witness of the Lord Jesus Christ and the Restoration of the Gospel of Jesus Christ. After retirement Roger and Verdell served 5 missions together for the Church of Jesus Christ of Latter-day Saints in Quito, Ecuador, Los Angeles, California and Mesa, Arizona. They worked consistently in family history work throughout their lives. In his final years, due to physical limitations, Roger found joy in serving the Lord by doing indexing for thousands of people, some of whom he is now probably getting to know in the Spirit World. Roger Button funeral Instructions how to view via live streaming January 30, 2021 11:00 am Arizona Time 1. Click this link: https://us02web.zoom.us/j/85602223420. If the link doesn’t work directly, then you can also go to https://zoom.us/join and input meeting ID: 856 0222 3420. If you are using the Zoom app click “Join a Meeting” and input meeting ID: 856 0222 3420. You will then be asked to provide your email and name as noted in step two. 2. You will be asked to include your name and email. This is a required Zoom feature that we cannot change. This information will never be accessed or used - so you can put in your information or make something up. The email may require at least an @ in the name. 3. This is a Zoom Webinar and so you will only be able to see and hear those who are speaking and the music and videos that are shared during the funeral. You will not be able to see anyone else who is watching the broadcast. 4. After the closing prayer the broadcast will end.

After loving and serving his family on earth for 83 years, Roger Bruce Button joined his family in the spirit world on January 22, 2021. Verdell Turley Button, his wife of 63 years, continues here to teach and bless their posterity of four... View Obituary & Service Information

The family of Roger Bruce Button created this Life Tributes page to make it easy to share your memories.

After loving and serving his family on earth for 83 years, Roger...

Send flowers to the Button family.