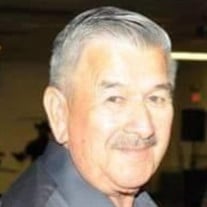 Written by Grandson, Elias Enriquez I never thought this day would come so quickly, yet what is promised to all of us has indeed come to pass. Rodolfo Enriquez Senior, known to everybody who knew him as Rudy, a husband, father, grandfather, brother, uncle, and cousin, has finally been called home by God on January 19, 2021. My brother, Noah, and I grew up hearing stories of the veteran of the Vietnam era, who served his country proudly and with distinction. We in turn could then be proud of the history he had been a part of. Though he could be stoic at times, he knew how to laugh and how to love and was willing to give it in abundance to all those he knew. His greatest gift, however, was the gift of laughter, to which he gladly shared with all. He was a stalwart wall, steadfast in his beliefs, and like steel for those who clung onto him for guidance. To my brother Noah and I, he was a man of iron, a hero from an age long since passed. We loved to hear his stories of how he would spend time out at sea during his service days, his time in Okinawa and the exotic places he visited, places that we can only dream of. I recall his love for older military shows and watching marine training programs on YouTube. He would always point out to us, what had changed and what had remained largely the same. He was proud to display his service days by often wearing hats that read “Vietnam Veteran.” He loved his children dearly, but even they were not spared from his comedic wrath. He had his own style of inside jokes that none of us could escape. His favorite, all time joke that will be remembered by all is: “Here, taste my salsa. No…it’s not hot!” Those of us who fell for this, know very well what that meant! When we would get together as a family, we always ended up playing the dice game, Left Center Right (LCR). Tata Rudy would always say that Noah and I were his ‘favorite’ grandsons and that we needed to share our chips with him in order for him to win the big pot! Oh, and let’s not forget there was always a new rule created when we played…sometimes he would benefit from it, sometimes not. One thing guaranteed, there were plenty of laughs! My Tata Rudy also possessed a love for fishing and it was this love that he introduced to me, and I imagine to my own father, Javier, as well. It was a relaxing pastime for him. I remember the first time Tata Rudy took me fishing and how proud he was of me when I caught my first trout ever. He was a man full of life and was willing to share it with those he loved and knew. He is survived by his loving wife Rosa for almost 58 years, his sons: Javier (Melanie), Daniel, and Roberto (Cynthia), his daughter Sylvia (Ren) and two grandsons, Elias and Noah, whom he loved truly. Rudy is also survived by his younger brother, Frankie and his younger sister, Mary who remained a steadfast connection all these years. He is preceded in death by his parents, Francisco and Rosa, his sisters, Adeline, Helen, Lupe, and his eldest son, Rudy Jr. Tata Rudy, you lead a fantastic life, one that I believe we all aspire to have, but now, it is time for you to take the greatest journey of all, the journey to go home. We love you Tata Rudy, and we will never forget you. Go and say “Hi” to Uncle Rudy from all of us when you get there.

Written by Grandson, Elias Enriquez I never thought this day would come so quickly, yet what is promised to all of us has indeed come to pass. Rodolfo Enriquez Senior, known to everybody who knew him as Rudy, a husband, father, grandfather,... View Obituary & Service Information

The family of Rodolfo Federico Enriquez Sr. created this Life Tributes page to make it easy to share your memories.

I never thought this day...

Send flowers to the Enriquez family.