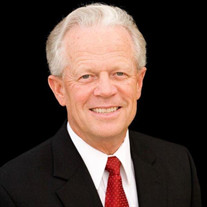 Robert Lorenzo Wright passed away peacefully on Saturday, February 6, 2021 surrounded by his loving family. The 23rd day of May, 1947 was a joyful day for Bassett and LaRee Wright. Their daughter Carolyn had a little brother! Later, Louise and Jayne would complete their family. Bob was fortunate to grow up on North Orange Street in Mesa and went to school at Emerson Elementary, West Jr. High (now Carson Jr. High), and Westwood High School, where he was a member of the first graduating class of 1965. He continued his higher education at Arizona State University and graduated with a degree in Business Administration. Bob sold Real Estate and provided a good living for his family. During his high school and college years he loved working at Wright’s Markets with his father, uncles and many cousins. Bob enjoyed all kinds of music throughout his life and played the piano and trumpet. From the age of 12, he sang in a Barbershop quartet called the “Harmonaires” with his good friends Jim Robson, Wilford, and Darl Andersen. Bob had a beautiful bass voice and he sang in the top choir at ASU, the ROTC choir at ASU and the Arizona Mormon Choir. Bob loved sports, especially baseball and softball. He had the honor of playing for the 8th Ward fastpitch softball team and traveled to Salt Lake City, Utah where they won the All-Church tournament. Bob met Stephanie Jo Woods at ASU and they married in the Mesa Arizona temple on September 4, 1969. He is survived by his wife Stephanie and their seven children: Chris (Krista) Wright, Gretchen (Jeff) Ward, Shane (Debbie) Wright, Jonathan (Lindsay) Wright, Adam (Kellie) Wright, Kelsey (Ben) Tingey, and Mackenzie (Brian) Coleman, 31 grandchildren, and his sisters Louise (Mitch) Jones and Jayne (Bill) McCook. His faith and family meant everything to him. His mother LaRee taught Bob great appreciation for the outdoors and he loved hunting, fishing, and boating which he passed on to his children and grandchildren. The family cabin in Groom Creek and all the trips to Lake Powell were his favorite spots to vacation with friends and family. These times are now precious memories to all who spent time with him. Bob could fix anything. He often laughed that his skill as a handyman was the only reason he was invited to go on vacations with others. But if you knew Bob, you knew just how much fun he was to be around. His legendary dry, off the wall humor was so endearing. His comedic routines entertained many over the years and he especially loved to impersonate famous people on Halloween. There just isn’t anyone funnier than Bob, and those memories will continue to keep those who knew him smiling. Bob was dedicated to The Church of Jesus Christ of Latter-Day Saints, and loved serving others. He served a mission in Scotland and loved the people there. Both Bob and his father Bassett presided as bishops over the same Mesa ward serving nearly 60 years apart. Bob's gifted leadership and powerful ability to love brought many souls unto Christ. Bob was kind, humble, obedient, selfless, and filled with charity. Someone close to him summed up the essence of Bob: "He lived, loved and served with all his heart, and endured well to the end." Funeral services for Bob will be held on Saturday, February 13, 2021 at 10:00 a.m. at the Maricopa Stake Center, 613 N. Stewart, Mesa, AZ 85201 with a view at 9:00 a.m.

Robert Lorenzo Wright passed away peacefully on Saturday, February 6, 2021 surrounded by his loving family. The 23rd day of May, 1947 was a joyful day for Bassett and LaRee Wright. Their daughter Carolyn had a little brother! Later, Louise... View Obituary & Service Information

The family of Robert Lorenzo Wright created this Life Tributes page to make it easy to share your memories.

Send flowers to the Wright family.