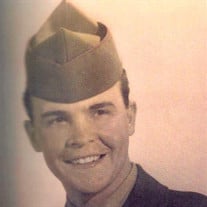 Robert Bruce “Bobby” Boucher January 9, 1930 – February 21, 2020 Robert Bruce “Bobby” Boucher, our beloved hero and songbird, died in the loving arms of his family in Mesa, Arizona on February 21, 2020. He was, and will always be, our North Star. Born in Buffalo, NY, on January 9, 1930, Bruce enjoyed 90 years of a life well lived, constantly supported by admirers, friends and family. Accompanied by his big-hearted, little brother, Richard “Ducky” Boucher, Bruce had a story-filled childhood growing up on South Division Street, under the loving care of his mother and father, Margaret Louise and Rupert Boucher. Bruce’s parents ran a colorful, boarding home with a poker table to provide for their sons during tight times during the depression and WWII. Bruce’s personality was shaped in these memorable years. At a young age, he and his brother formed the ability to make friends easily and converse with fascinating people from all walks of life – a skill that served them throughout their lifetimes. Joining the U.S. Army in the early 1950s, Bruce deftly used his trigonometry skills to serve in a capacity that kept him safe from danger during the Korean War. A common thread throughout his life was to protect people from harm through his intellect and problem-solving prowess. Bruce’s 40-year career as an accomplished Safety Compliance Officer for OSHA and freelance occupational safety specialist sustained the Boucher family and moved them westward, to Las Vegas in the 1970s and to Mesa, Arizona in 1983. In both his life and work, no challenge was too big for Bruce. He addressed every obstacle with the resolute statement, “We will figure this out.” And he did. He solved every problem thrown at him, with his fellow mastermind, best friend and the love of his life, Vincey. Bruce’s life was forever changed in the early 1950s, on the fateful day he met Vincey Silsby while attending business school. One glance at a fire drill was all it took for Vincey to know, without question, that Bruce was the man she was meant to love for her entire life. Little did she know that Bruce had already chosen her as “the one.” For over 62 years they danced together, loved generously, celebrated each other’s talents and raised their four children in a home full of art, music, lively debate, games, laughter and unconditional love. Together, Vincey and Bruce created a home that was a safe harbor to all who visited. One of their family’s most cherished memories was when Bruce and Vincey renewed their vows in 2007, in a surprise beach ceremony at sunset to celebrate their 50th wedding anniversary. One of the family’s favorite stories is when Bruce “discovered” his voice. Though he sang along to the radio and enjoyed music all his life, Bruce accidentally discovered he was a phenomenal singer at a bar one night, visiting his daughter, Jolie. He bravely stepped up to the mic and belted out a Sinatra tune to a roomful of strangers. The place erupted with applause. A star was born. Bruce spent the best years of his retirement filling every room he entered with music. A natural talent, he delivered each note with his whole body and soul, which inspired many standing ovations. When he sang, everyone’s little town blues melted away. Bruce was legendary. The gravitational pull changed every time he entered a room. He was a master storyteller with a never-ending twinkle in his eye and an ever-present punch line on his tongue. He was handsome, charismatic, resilient and mercurial. He had a fierce, unwavering conviction to live life on his own terms. A consummate conversationalist, he was never at a loss for words. He embraced misfits, underdogs and outliers. He was the grand poobah of penny-pinching…the crown prince of the poker face… a horse race whisperer and sports book czar with an iron stomach and toenails of steel. A good-humored grandpa with a Donald Duck voice, he cured childhood speech defects by forever crooning, “Who parked the car?” in the key of C. Most importantly, he was a fearless leader and a safety net to those he loved. Nothing meant more to him than his family. Through every trial or tribulation we faced, his unconditional love and support always helped us find our way home. Bruce is survived by his loving wife, Vincey Boucher; his brother, Richard Boucher; his children, Jeff, Mike and Sara Boucher and Jolie Grant; son-in-law, Chip Grant and grandchildren, James Boucher, Charlie Grant, Grace Rhodes, Lucy Rhodes and Everett Rhodes. He is preceded in death by his mother, Margaret Louise Boucher; father, Rupert Boucher; aunt, Jean Boucher; mother-in-law, Viola Payne and sister-in-law, Maryann Boucher. “For what is a man, what has he got? If not himself, then he has naught. To say the things he truly feels and not the words of one who kneels. The record shows I took the blows and did it my way. Yes, it was my way.” Please join us for a music and memory-filled celebration of Bruce’s remarkable life on Sunday, March 1, 2020 from 10am-1pm at Jolie’s Place, 140 West Warner Blvd., Chandler, AZ.

The family of Robert "Bobby" Bruce Boucher created this Life Tributes page to make it easy to share your memories.

Send flowers to the Boucher family.