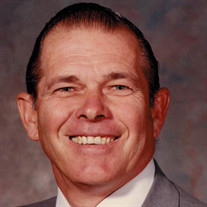 Richard Bruce Towne passed away on Sunday 1 Nov 2020 in Mesa, AZ at the age of 86. He was a devoted family man, inspiring educator, and creative author. His faith in his Savior Jesus Christ was a guiding force through the years and prompted him to serve others in many ways during his long and happy life. Richard was born in Milo, Maine to Barbara (Strout) and Earle William Towne, and was the youngest brother of Earla (Nelson) and Marvin. After finishing high school in Elizabethtown, NY, he attended Springfield college briefly prior to enlisting in the US Air Force. After other postings, he was assigned to Davis Monthan Airbase in Tucson where he joined The Church of Jesus Christ of Latter-day Saints and met his wife Claudia (Clawson). Richard and Claudia were sealed for time and all eternity in the Mesa temple in 1958. They were happily married for 40 years until Claudia's passing at age 65. He was devoted to his family. He and Claudia were the parents of five children, each of whom they loved dearly. Jeanine currently lives in Idaho. She and Tom are the parents of Elizabeth, Daniel, and David. Steven lives in Maryland. He and Ann are the parents of Julie (Julie and Armando are the parents of Sebastien and Tabitha), Christine, Robert, and Michael. Gary lives in Mesa. He and Lori are the parents of Emily and Kacy. Carolyn lives in Mesa, too. She and Richard are the parents of Rebecca, Breanna, Katherine, Jonathan, and Megan. Deborah also lives in Mesa. She and David are the parents of Isabella and Lillian. Richard earned his bachelor's and master's degrees at the University of Arizona, and later completed course work at BYU and ASU. He had a long career as an educator, including over 10 years as a PE coach. He also worked many other jobs including delivering newspapers, working in fields and factories and stores, and cutting firewood. He enjoyed creating many projects, including authoring a book that is popular with his grandchildren. He worked primarily in Mesa, but also in Tucson, San Jose, Wellton, and Gilbert. In 2000, Richard married Kay (Bunnell Howard). They lived happily together in Huntington Beach California enjoying both extended families. They were able to do some traveling and later served a full time mission for the Church in Kirtland Ohio - a highlight of their marriage. In his final years as Richard's health declined and he needed more care, he moved back to AZ. He lived in Brookdale Broadway Mesa and in Extended Family Homes. His family wishes to express their appreciation to the caregivers who supported him during his last years. Richard was a faithful member of The Church of Jesus Christ of Latter-day Saints and blessed the lives of those he served in a variety of callings, including as a Scoutmaster, teacher, mission leader, bishopric member, and as a senior missionary. He ministered to many and blessed their lives not only in what he taught, but how he loved and served them. Prior to his passing, Richard recorded the following: "Grandpa loves you very much... Dear kids, dear grandchildren, please remember the Gospel is true, that Heavenly Father loves you, and He knows you by name. He knows who you are. And so I admonish you to be true and faithful to the covenants that you have made."

Richard Bruce Towne passed away on Sunday 1 Nov 2020 in Mesa, AZ at the age of 86. He was a devoted family man, inspiring educator, and creative author. His faith in his Savior Jesus Christ was a guiding force through the years and prompted... View Obituary & Service Information

The family of Richard Bruce Towne created this Life Tributes page to make it easy to share your memories.

Send flowers to the Towne family.