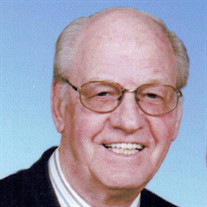 Richard D. Vos Richard (Dick) Vos ascended to God’s heavenly kingdom on February 5, 2021, where he was greeted by his parents, Henry and Emma Vos, his six brothers, and four sisters. Born May 5, 1927, Dick was the middle sibling of 11 children. In 1945, he joined the Marines and was shipped to Korea where he served as a radio operator. Dick was wounded by mortar shells, airlifted to a MASH unit in Japan and hospitalized at Great Lakes Hospital in Waukegan, IL, for 11 months. After seven years of service, Dick was honored with the Purple Heart Award. While on leave in Fargo, ND, Dick met his beloved Betty. They were married May 31, 1952. With the assistance of the World War II Educational Bill, Dick was able to get his Bachelor of Science in Accounting from North Dakota State University in Fargo. Dick’s career took him to Kemper Insurance in Chicago, Consolidated Foods in Kansas, and finally to Phoenix where he and Betty began Vos Accounting doing tax work for small businesses. A huge thank you goes out to the clients they were so fortunate to have for over 30 years. Dick leaves behind his loving wife, Betty, of 68 years, son Michael (Cheryl) Vos, daughter Allyson Vos, two grandchildren, two great grandchildren, many nieces, nephews, and dear friends. Many thanks to the Banner Healthcare Hospice staff and also the wonderful neighborhood folks who have assisted with care these past years. A military service will be held at a later date at the Arizona Veteran’s Memorial Cemetery in Scottsdale. In lieu of flowers or donations, please plant a tree or bush in his memory.

Richard D. Vos Richard (Dick) Vos ascended to God&#8217;s heavenly kingdom on February 5, 2021, where he was greeted by his parents, Henry and Emma Vos, his six brothers, and four sisters. Born May 5, 1927, Dick was the middle sibling of 11... View Obituary & Service Information

The family of Richard "Dick" D. Vos created this Life Tributes page to make it easy to share your memories.

Send flowers to the Vos family.