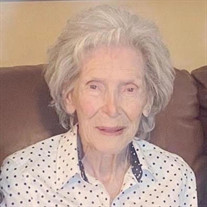 Priscilla Roberts Whitfield 1928 - 2020 Very seldom do we ever meet a person who struggles through a life of extreme hardship, but always wakes up with a song, eager to face a new day. That was Priscilla Whitfield . . . loving to sing, loving a sunrise. Having lived a long life of optimism, she passed away at the age of 92 on October 16th at her daughter’s home in Gilbert, AZ Priscilla was born the fourth child in a family of ten children on February 11, 1928 in East Riverdale, MD to Terrell Roberts and Juanita Ramsey. Her childhood was spent in a fashion similar to most who were poor during the Depression, and yet she was quick to relate uplifting stories about the pure love and protection of her older brothers and sister, and the nurturing care she gave her younger sisters. In 1945 she married a sailor, Leonard E. Whitfield, and embarked on a life of adventure while moving to numerous states. He introduced her to the Church of Jesus Christ of Latter-day Saints and she immediately felt the truth of its teachings. They were sealed in the Salt Lake Temple in 1946 and, in later years, Priscilla became an ordinance worker in the Mesa Temple where she served faithfully for twenty years. After moving to Alaska in 1958, Priscilla learned that she truly loved the rugged outdoors with its hunting and fishing, if not the severity of the weather. Life was hard, often living without running water or electricity but, being ever the optimist, she made a cozy home wherever she was and faced daily life with hope and enthusiasm. In 1967, she and her family left the wilderness country and moved to Mesa, AZ for the remainder of her life. If asked about what she loved most in this life (aside from her family), Priscilla would no doubt say that she loved and enjoyed animals of all kinds, her amazing neighbors and friends in the Mesa 20th Ward, babies, and above all, her Savior, Jesus Christ. Priscilla is survived by her children, Diane Cozzens, Rhonda Larson and John (Juanita) Whitfield; thirteen grandchildren, thirty-one great-grandchildren, and four great-great-grandchildren. She was preceded in death by her husband in 1998, her eldest son Leonard T. Whitfield earlier this year, two grandchildren, one great-grandchild, and five brothers and sisters. A visitation will be held at 6:00pm on Thursday, October 29th at Meldrum Mortuary, 52 N. Macdonald, Mesa, AZ. There will be a private family service on Friday, October 30th at Meldrum Mortuary with interment at the Mesa City Cemetery.

Priscilla Roberts Whitfield 1928 - 2020 Very seldom do we ever meet a person who struggles through a life of extreme hardship, but always wakes up with a song, eager to face a new day. That was Priscilla Whitfield . . . loving to sing, loving... View Obituary & Service Information

The family of Priscilla Roberts Whitfield created this Life Tributes page to make it easy to share your memories.

Very seldom do we ever...

Send flowers to the Whitfield family.