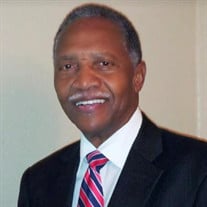 Percy Carr Lathion the third oldest of 10 children was born, July 10, 1937 to Percy and Maggie Carr Lathion in West Blocton, Bibb County Alabama. After his family moved to Bessemer Alabama he confessed Christ at an early age and joined the Bethel AME Zion Church where he participated in Sunday school, Christmas caroling and performed in the Easter pageants. He attended Roosevelt Junior High and Wenonah High Schools where he graduated in 1956. He participated in band and played the clarinet during his time throughout high school. Because of his interest in electronics and mechanics, shortly after completing High School he entered the United States Air Force in 1956. He ended his Air Force career as Senior Master Sergeant and was honorably discharged. In May 1961, he married the love of his life, Marcena Delanie Berksteiner. From this union 2 children were born, 1 son, Roderic Carr Lathion and 1 daughter Tracy Lathion. During their Air Force career the family lived in Maine, New York, Georgia, Florida, Arizona, Spain, Nebraska and ultimately retired in Gilbert Arizona in 1984. In 1985, he continued to work as a Configuration Manager for Allied Signal Company finally retiring in 1996. In 2002, he united with Holy Trinity Community AME Church serving faithfully as a choir member, trustee and treasurer. He also worked tirelessly as one of the landscapers and took pride in the appearance of the church. He was a recipient of numerous awards, Outstanding Noncommissioned Officer in Charge, Holy Trinity Church Trustee of the Year, Man of the Year Award, Spirit of Service Award, and a Meritorious Service Medal for Outstanding Service, which is awarded to any member of the armed forces of the United States who distinguishes themselves by outstanding achievement service. He was an avid watcher of sports, he loved gardening and carpentry. Tinkering around with the car, hemming a pair of pants, sewing new seat covers or restore old bikes to new, he had the talent to fix anything! He stressed the rules of right conduct and firmly believed that man should follow the work/life of Jesus rather than idle worship without action. He is survived by his wife of 59 years, Marcena Lathion, two children, Roderic Lathion (Wendy), Tracy Lathion-Houck. He is survived by 5 sisters, Wilma Vaughn, Barbara Williams, Patricia Thomas, Gloria Evans, and Josephine Hooks. Two Sisters-in-law, Yvonne Lathion and Gertrude Paige Seven grandchildren, Easton Lathion, Indya Lathion, (Their Mother, Denise) Nicholas Houck, Mikayla Houck, Wendy Martinez, Peter Martinez and Vale Martinez And one Great-Grandson, Kamren Lyric Lathion-Lujan A host of beloved nieces and nephews A multitude of friends If you cannot attend in person and would like to attend virtually, click on this link, https://evt.live/ethingtonproductions/percy-carr-lathion The live stream will begin promptly at 10 am and will continue at the cemetery.

Percy Carr Lathion the third oldest of 10 children was born, July 10, 1937 to Percy and Maggie Carr Lathion in West Blocton, Bibb County Alabama. After his family moved to Bessemer Alabama he confessed Christ at an early age and joined the... View Obituary & Service Information

The family of Percy Carr Lathion created this Life Tributes page to make it easy to share your memories.

Percy Carr Lathion the third oldest of 10 children was born,...

Send flowers to the Lathion family.