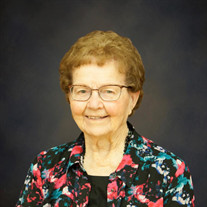 On Monday, March 16, 2020, Pearl Clement Nichols, mother, grandmother and teacher, passed peacefully at the age of 94. Pearl’s last testament at church: I lived an abundant life. Pearl Clement was born in Mesa, Arizona on February 11, 1926 to Emily Maude Johnson and Lester Elden Clement. Pearl was the seventh of eleven Clement children. Pearl grew up on the family farm at what is now the corner of West University and North Extension. Though the Clement family never had much, they always had enough and they always had each other. Pearl learned at a young age to care for everyone by watching her parents feed or offer work to those passing through during the years of the Great Depression. Pearl enjoyed many things as a youth: pitching for her championship softball team (often without a glove), playing Annie-I-Over with cousins and siblings, working on the farm, and being a clerk at the JC Penney’s Company. She learned independence at a young age by walking home from kindergarten at the old Alma School, her path following the railroad tracks and water canal. Pearl started dating the “pesty neighbor kid who liked to tease,” Billy Nichols, when she was 15. Billy was good friends with Pearl’s older brother Lee. Pearl and Billy dated off and on until Pearl graduated from Mesa Union High School. Despite the breaks in their relationship, she was always certain of Billy’s love and devotion. Later in life she said, “I knew I just had to look at him and I would get him back!” While on a 3 day leave before being shipped to the Battle of the Bulge, Billy slipped a ring on Pearl’s finger. Billy saved a picture of Pearl in his New Testament that he kept in his pocket as he weathered the horrible effects of being on the front lines. Billy and Pearl were married September 24, 1946 at the Clement home and later sealed for time and all eternity in the Mesa, Arizona Temple of the Church of Jesus Christ of Latter-day Saints. Pearl and Billy started their home at 546 W. 8th Street with just a small kitchen, living room/bedroom and bathroom in January of 1947. Through the years they added on as they could afford and only needed to borrow money once for the home. In the 60s they borrowed $2,000 for a kitchen and washroom and paid the money back within a year. Pearl and Billy had two daughters spaced three years apart, Kathleen and Carol Ann. The family loved to camp and travel around Arizona, taking many scenic Sunday drives. Pearl was known for sewing matching holiday dresses for herself, her daughters, and even their dolls. At the age of 35 Pearl felt the prompting to go to college to get her teaching degree. With full family support she graduated with distinction from ASU in 1964 and received her Masters in 1968. Pearl taught 3rd grade at Whittier for 28 years and still continued to help in classrooms even after retirement. Pearl remembered every child she taught and teaching brought her great joy. Billy passed away when Pearl was just 48 years old as they worked side by side in the field behind their home. After the loss of her sweetheart, Pearl continued to put all her time and energy into her family and students. Pearl often spoke of how richly she was blessed as her two daughters quickly became 9 grandchildren which then led to 46 great grandchildren. Plus she felt it a great pleasure to have been the favorite teacher of hundreds more. The ripple effect of her life is far reaching. Former students remember her tender patience. Grandchildren remember her strength and stability, offering them many idyllic childhood memories. All remember how she gave so freely of her attention and love. In her golden years Pearl continued to work tirelessly in the yard and could often be found with a crossword puzzle in hand. She said it kept her mind sharp. Pearl was a member of the Mesa 4th Ward, 8th Ward, 20th/Heritage Ward and Westwood Ward of the Church of Jesus Christ of Latter-day Saints and cherished her friendships found there. Pearl is survived by her sister Dora and brother Lee, her daughters Kathleen (Don) Papa and Carol Ann Rowley, grandchildren Kristen (Bracken) Walker, Thomas (Karra) Papa, Billy (Karen) Rowley, Kari (Brian) Mills, Katie (Renny) Ison, KaraLyn (Chuck) Melser, Nichelle (Jeremy) Buckner, Karyn (Justin) Olson, Kathryn (Ryan) Melzer, 45 great grandchildren, and hundreds of former 3rd grade students. Pearl was preceded in death by her sweetheart Billy, five sisters, Mary, Margaret, Zelda, Alta, Nione; three brothers, Elvin, Heber, Donald, and a great granddaughter Sadie Ison. She was looking forward to meeting her Mama and Papa again and wanted to give her Mama a new blue dress. When Grandma died, the world also seemed to stop. Because of our inability to have a public funeral at this time, we ask and encourage all who have a memory with Pearl, to share one here. We may not be able to mourn in person, but thanks to technology, we hope to be able to compile all written memories into a book.

The family of Pearl Clement Nichols created this Life Tributes page to make it easy to share your memories.

Send flowers to the Nichols family.