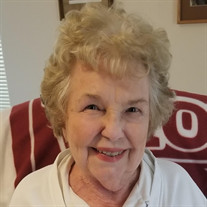 Patricia Sue Stapley Norton Gilbert - Patricia Sue (Stapley) Norton, age 89, peacefully passed away in Gilbert, AZ on January 29, 2020. "Patty"was born April 6, 1930 in Phoenix to Lorel Aaron Stapley and Mildred Azola Pomeroy. She was the youngest of 4 children and the last surviving member of her immediate family. She was the granddaughter and great granddaughter of many of the founding fathers of Mesa, passing on the history of this area to her posterity. Patty attended Kenilworth Elementary School and North Phoenix High School where she graduated as one of the top scholars in her class. She grew up going to the family cabin in the White Mountains in the summer. While attending Phoenix College Patty married Richard (Dick) Norton in 1950, who passed away a year ago, and were married for 68 years. He said he always wanted to "marry a woman he could ride the river with", and that he did. Not only that, she dated him as he piloted a private plane, hunted, fished, rode horses, camped and cooked over open fires. This city girl was ready to try anything. They moved to the Los Angeles area for Dick's work and she was a member of the Junior League. She continued this volunteer work when they relocated to San Diego. They went on to raise their 3 children there, living in La Mesa in the Mt. Helix area. She made life-long friends in The Church of Jesus Christ of Latter-Day Saints in San Diego. At retirement she and Dick moved back to Arizona and settled in Gilbert, becoming very involved in mentoring students in business and entrepreneurship for many years, even into their eighties. Patty was the President of the Half Century Club in 2010-2011 for Phoenix College and was an Alumni Hall of Fame Honoree. She was extremely intelligent, social, beautiful, and had a personality that was bigger than life. No one could be more proud of the accomplishments of their children, grandchildren and great grandchildren. She was preceded in death by her parents, Lorel and Zola, and her siblings, Mildred (Stapley) Dana, Lorel Stapley, Jr. and Donald Thomas (Tom) Stapley. She leaves behind 3 children, Lorel "Lori" Ann Bayless, Rollo "Rick" Richard Norton, II and Scott Stapley Norton, 9 grandchildren, Doug Bayless, Jon Bayless, Jennifer (Bayless) Incardone, Cassandra (Bayless) Orme, Richard Norton, II, Erik Norton, Heather (Norton) Mildenstein, Chelsea (Norton) Prince, Paul Qualin, and 34 great grandchildren, all of whom love her dearly and will have lasting, sweet memories of her.

The family of Patricia Sue Stapley Norton created this Life Tributes page to make it easy to share your memories.