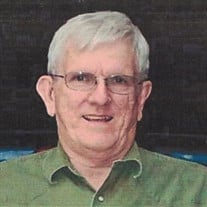 Please join us in mourning the passing of Otto Morris Farnsworth Jr., aged 72, of Mesa, AZ, known as Morris to his friends and family and “Papoo” to his grandkids. He passed peacefully in his sleep on the morning of July 29, 2020 after losing his battle with both cancer and COVID. Morris Is affectionately remembered by our loving mother, his wife of 51 years, Debra (West) and by his four daughters Valerie Southwick, Alyson Gardner, Amy Rodriguez and Bethany Slade; his sons Gregory and Michael; and by a plethora of grandchildren (18)...and even a few grandpuppies & grandbunnies. He is also survived by one brother, David. Morris was born on January 31, 1948, to Otto and Alice Farnsworth, the youngest of 4 sons. He graduated in 1966 from Paonia High School in Colorado, and then served a mission in Argentina (1967-1969) for The Church of Jesus Christ of Latter-day Saints. Upon his return he wed his longtime sweetheart, Debra, on August 7, 1969 in the Salt Lake City Temple. During his life he worked in many varied careers, including sno-cone entrepreneur, auto mechanic, flooring salesman, newspaper deliveryman, real estate agent, and computer IT consultant before finally finding his passion as the Property Manager of Silveridge RV Resort, where he worked for 25 years until his retirement. Morris was actively involved in organizations promoting the RV & Campground industry at both the state & national level, and proudly served as President of the Arizona RV Association. He later served on the board of the National ARVC. He thoroughly enjoyed his time getting to know the residents of Silveridge, many of whom became lifelong friends. Once retired, he was able to dedicate more time to the things he loved most like traveling, writing, wood working, and especially spending time with his grandkids and family. Morris was a self-taught jack of all trades, including writer of short stories, poetry, and other inspirational reflections on life. He even spent time as an auctioneer. He was also known for his culinary and baking skills, especially appreciated by his wife, his children and grandchildren. Morris was always willing to help with a home remodel, changing brakes on the kids’ cars, or any other computer, home, appliance, or automotive related emergency. In fact, his grandkids thought he was Superman and could fix anything. He was never one to shy away from learning how to do something—even before the internet. As his family spread out across the US, it never stopped him from visiting as much as he could. He will be sorely missed. He was preceded into the afterlife by his parents Otto and Alice Farnsworth, and his brothers Richard and Robert. Funeral services will be held on Monday, August 10, at the Mesa Maricopa Stake Center, followed by interment at Mesa Cemetery. In lieu of flowers, please consider a donation to the American Cancer Society, or a cancer research nonprofit organization of your choice.

Please join us in mourning the passing of Otto Morris Farnsworth Jr., aged 72, of Mesa, AZ, known as Morris to his friends and family and &#8220;Papoo&#8221; to his grandkids. He passed peacefully in his sleep on the morning of July 29, 2020... View Obituary & Service Information

The family of Otto Morris Farnsworth Jr. created this Life Tributes page to make it easy to share your memories.

Please join us in mourning the passing of Otto Morris Farnsworth...

Send flowers to the Farnsworth family.