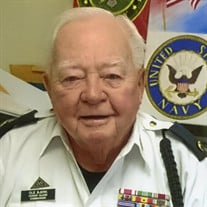 In Loving Memory Orlo “Ole” Robert Bjerk July 18, 1933 – February 22, 2021 Orlo “Ole” R. Bjerk, 87, of Mesa, Arizona passed away peacefully on Monday, February 22, 2021. Orlo was born on July 18, 1933 to Olaf “Buster” and Gloria Bjerk in Sioux Falls, S.D. where he spent his childhood years with his two younger sisters Connie and Lois. Orlo attended Washington High School and he decided to join the South Dakota National Guard early in 1949 before graduating. After active duty, he came back to Sioux Falls and finished high school. He was united in marriage to Dorothy Krier on August 7, 1954 in Sioux Falls, where they raised their seven children, Kim, Brad, Scott, Dan, Kris, Lisa, and Kathy. Orlo Bjerk spent 42 years in the South Dakota National Guard, amazingly enough, all of it in the 147th Field Artillery. Less than a year after he joined as a PV1, his unit was ordered to active military service on August 22, 1950. The 196th Infantry, to which the 147th Field Artillery and 200th Engineer Company were assigned, was sent to Ft. Carson, CO and then on to Ft. Richardson, Alaska. The unit was released from active duty on July 26, 1962. Bjerk was a PFC at the time and three years later he was promoted to SFC E-7. During the Cuban Missile Crisis, the 147th Field Artillery was again ordered to active federal service, this time to Ft. Sill, OK. The unit was released from active duty on August 11, 1962. It was on August 1, 1969 that Bjerk was promoted to SGM E-9. One year later to the day, COL Dean Mann appointed Bjerk the Command Sergeant Major of the 147th Field Artillery Brigade. CSM Bjerk was Honorably Discharged on September 14, 1991, exactly 42 years to the day, from the date he enlisted. Besides his military career, Orlo worked as a “Beef Grader” for John Morrell & Co. for 18 years before deciding he wanted to change careers. He went back to school attending Augustana College and graduating with a degree in Respiratory Therapy. Upon graduating, he accepted an opportunity to work in Harper, Kansas to begin his medical career. After a year in Kansas, the family moved to Slayton, Minnesota where he worked at Murray County Hospital, with several positions from Respiratory Therapy to Administrator. After Murray County Hospital, he held administrator positions in Flandreau, SD, Clear Lake, SD. In 1991, Orlo decided to head south and moved to Springerville, AZ. There he finished his career in Respiratory Therapy. On March 23, 1997, Orlo married his love Ann Kunkel who brought her children Lorna, Diana and Joel into the family. Orlo loved spending time with all of the family especially the grandkids. He was dedicated to his family, friends and a strong advocate for other veterans. He was proud to be a member of the American Legion and held many positions during retirement, including Post Commander, Adjutant, Chaplain, Finance Officer as well as Honor Guard Commander. He was a proud member of the American Legion Post 26 for 28 years and held the following positions, Department Judge Advocate, Department Oratorical Chairman, Department Rehabilitation Chairman, National Americanism Council, Post Adjutant 44, Post Adjutant 115 Scottsdale, Post Adjutant and Post Commander at Post 26 Voiture 1466 Voyageur, La Societe, Grand du Arizona Orlo was proud to be an American. Orlo is preceded in death by his parents; 1st wife, Dorothy; infant daughter Lori; step-daughter Lorna Kunkel-Hall; sister Connie Ryan; and several in-laws and friends. He will be greatly missed by his wife Ann, and his seven children: Kim (Howard) Konkol of Slayton, MN; Brad (Sandy) Bjerk of Lakeville, MN; Scott (Julie) Bjerk of Gilbert, AZ; Dan (Karen) Bjerk of Queen Creek, AZ; Kristi (Greg) Monson of Madison, MN; Lisa (Stacy) Ohme of North Mankato, MN; Kathy (Mark) Counter of Slayton, MN. Step-children; Joel Kunkel and Diana Ogden; Sister Lois (Daryl) Fritz; 21 grandchildren and 15 great-grandchildren. In lieu of flowers, the family requests donations be sent to American Legion Post 26, 505 W 2nd Ave, Mesa, AZ 85210 We salute and love you Command Sergeant Major! Blessed be his memory!

The family of Orlo Robert Bjerk created this Life Tributes page to make it easy to share your memories.

Send flowers to the Bjerk family.