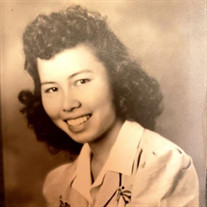 Ofelia Sekiya Salas 96, passed away peacefully on August 6, 2019 at home in Mesa, AZ. She was born on June 15, 1923 in La Union, NM. Ofelia grew up on a farm in Lehi, AZ. Her “Papa” Kentaro Sekiya, was known as the “Carrot King” of Lehi. Ofelia, being the eldest of eight children, worked alongside her Papa before and after school. She loved school and competing for the highest grades with her classmates. However, that ended during her senior year at Mesa High School when those of Japanese descent were forbidden to cross the railroad track during the war. She married Manuel D. Salas in Nogales Mexico because Japanese were not allowed to intermarry in the US. They made Mesa, AZ their home and for their three children, Daniel, Virginia and Gene. Manuel was a welder for Williams Air Force Base and Ofelia a homemaker who later worked part time for Mesa Public School’s cafeteria; a job she treasured! She loved nature, camping, gardening, children, and talking with young people. She had a sharp mind, and although she had arthritis since 40, she was a hard worker! Ofelia is survived by her three children Daniel, Gene, and Virginia along with five grandchildren and three great grandchildren. Surviving siblings are Sabro, David, Lily, and Linda. She was preceded in death by her husband Manuel, sister Maria, and brothers Leo and Fred. A Memorial Service will be held on Friday, August 9th at !0:00 AM at Meldrum Mortuary, located at 52 N. MacDonald, Mesa, Arizona 85201

The family of Ofelia Sekiya Salas created this Life Tributes page to make it easy to share your memories.

Send flowers to the Salas family.