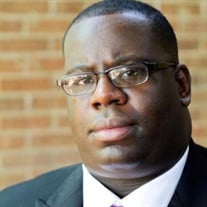 A CELEBRATION OF LIFE Oba Najja Lee Faggett SUNRISE February 11, 1979 SUNSET May 31, 2020 Bethel Chandler Church Chandler, AZ June 5, 2020 6:00 P.M. Pastor Mike Gowan LIFE’S JOURNEY On Sunday, May 31, 2020 our Heavenly Father called His Servant home to rest. Minister Oba Najja Lee Faggett was born February 11, 1979 to Wallace and Edna Lee Faggett in Dallas, Texas. Oba Najja was confirmed in the faith at an early age and was a member of St. Luke “Community” United Methodist Church under the leadership of Rev. Dr. Zan Wesley Holmes. He was an acolyte, usher, President of the Lillie E. Berry Choir, and an Eagle Scout. Oba Najja was a 1997 graduate of Skyline High School where he was a member of the marching band. He received a degree in Hospitality and Tourism Administration at Tennessee State University in 2003. He was a member of the Aristocrat band. Oba Najja started his career in Hospitality and Tourism at the Fairmount and Hilton Anatole Hotels in Dallas, Texas. He worked Vanderbilt University and transitioned to the Gaylord industry in Nashville, Tennessee as Hospitality Captain. Upon his move to Mesa, Arizona he worked at the Arizona Grand Resort. His love for hospitality, ballroom dancing, music, cooking, and above all a love for God’s people led him into ministry. Oba Najja became a member of Bethel Church in Chandler, Arizona under the leadership of Pastor Preston Dobbins. He loved his church family. One of Najja’s favorite quotes was “Opportunities of a lifetime should be seized within the lifetime of the opportunity”. He leaves to cherish his memory his father - Wallace Faggett, mother - Edna Lee-Faggett, sister – Nneka Hobbs (Terance), brothers - Nicholas Faggett and Patiri Berkley all of Dallas, TX, and a host of aunts, uncles, nieces, cousins, and friends. A special thank you is extended to all people who were apart of his life.

The family of Oba Najja Lavoisier Lee Faggett created this Life Tributes page to make it easy to share your memories.