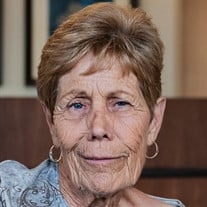 Nelda (Hilliard) Pickens long-time Mesa resident passed away on Tuesday, March 22, 2022. She was 83. Nelda was born in Texas but grew up in Arizona. She graduated from Scottsdale High School in 1957. She enjoyed spending time with family, friends, shopping, traveling, and family reunions in Texas, where she loved to spend time with her Barnhart cousins. Nelda held many different jobs in her early years but settled into long-term employment at Motorola Semi-Conductor in Mesa, AZ, where she worked as a lab technician. She retired from her long career at Motorola abt. 2000. Nelda is survived by her 2 sons, Jimmy James (Toni) of San Tan Valley, Az. and Fred Frazier (Marianne) of Layton, Utah. Also her brother Robert Hilliard of Overgaard, AZ., 8 grandchildren, and 14 great-grandchildren. She was preceded in death by her parents HB and Lee Ella Hilliard, sisters Gloria Genelle and Louise, brothers Virgil, Paul, and Bobby Hilliard. Nelda was married twice, first to Jimmie James Sr., her high school sweetheart for 5 years. Together they had one son, Jimmy, and then divorced. Her second marriage was to Larry Pickens for 12 years. She was widowed by her second husband by an accident on the job. Nelda had a 3rd companion for over 20 years with JC Epps, until his passing in 2012. She and JC had many friends in the classic car clubs and went on many hot rod car runs. They spent many summers enjoying the home they built in Overgaard Az. A little while after JC’s passing she went to live with her son Jimmy and daughter-in-law in San Tan Valley. She resided there until about 7 months ago when she moved into an assisted memory care home. Nelda's ashes will be interred with JC Epps in the City of Mesa Cemetery per their wishes.

Nelda (Hilliard) Pickens long-time Mesa resident passed away on Tuesday, March 22, 2022. She was 83. Nelda was born in Texas but grew up in Arizona. She graduated from Scottsdale High School in 1957. She enjoyed spending time with family,... View Obituary & Service Information

The family of Nelda Joy Pickens created this Life Tributes page to make it easy to share your memories.

Send flowers to the Pickens family.