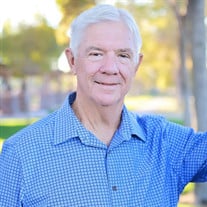 Michael Joseph Kalember, 71, of Mesa, Arizona, passed away peacefully at home with his family by his side on Friday, July 17, 2020. Mike was born on July 7, 1949 and was the oldest of five children; his brothers Robert, John, David and sister Karen. He spent his childhood years playing many different sports including his favorites, football and wrestling. He also was a dedicated and loyal boy scout and went on to achieve the highest rank attainable of Eagle Scout. After graduating from East High School in Phoenix, Mike joined the Navy in 1969 and served our country honorably for four years as a Communications Technician. He joined the Mesa Police Department in 1973 where he met the love of his life, Cindy. They married in 1976 and together raised four daughters. During his 27 years at the department Mike served in various roles including Investigations, K-9, Internal Affairs, SWAT, and Community Policing. Over the years, he promoted through the ranks and retired as a Commander. After two years of retirement, he returned to work and spent five years as the Director of Security for Mesa Public Schools before retiring for good in 2008. During retirement, Mike loved traveling the world with Cindy, family and best friends. He was always excited to plan the next adventure and new places to visit. Mike was the ultimate “girl Dad” before it was a thing, and raised his daughters to be strong, independent women. He had a passion for woodworking and spent long hours in his workshop crafting everything from lathe-turned music boxes to toy chests and picnic tables for his grandchildren. He had every type of tool or gadget and knew how to fix just about anything. Mike truly enjoyed being a police officer because he simply wanted to help people. His favorite time spent as a police officer was during the good old days of working the beat with his fellow officers who became close friends. He always had a craving to go fishing and loved being outdoors, especially on his boat in the middle of Big Lake. He was a man of few words but had a calming, confident presence. Mike had seven grandchildren and loved that he had the opportunity to help raise them. He was a playful grandfather, a wonderful supporter, and his grandchildren were proud to call him Papa. He is preceded in death by his father, Milan Kalember, mother, Shirley Osterson, and sister, Karen Vineyard. He is survived by his loving wife of 44 years Cindy, daughters; Julie Thomas (Kevin), Christina Ramsey (Kevin), Danielle Pool (Jason), Susan Kalember, and seven grandchildren; Matthew, Zachary, McKenzie, Raegan, Hayden, Taylor and Harrison. Mike’s family would like to thank Hospice of the Valley for the wonderful care and support they provided while he was resting at home. If you would like to make a donation to Hospice of the Valley please do so in Mike’s name. Hi Everyone, There will be a “walk-through memorial” for retired Mesa PD Commander Mike Kalember on Friday, July 31, 2020, at Meldrum Mortuary, 52 N. Macdonald St., Mesa. In attempting to follow CDC and social distancing guidelines, there will be a limit of 45 people inside the mortuary at one time. Therefore, it is requested that if you plan to attend, please do so at the time scheduled below according to your last name: Last Names Beginning with Letters A-H: 5:00 PM Last Names Beginning with Letters I-P: 5:30 PM Last Names Beginning with Letters Q-Z: 6:00 PM A private memorial service for family members will follow at 6:30 PM.

Michael Joseph Kalember, 71, of Mesa, Arizona, passed away peacefully at home with his family by his side on Friday, July 17, 2020. Mike was born on July 7, 1949 and was the oldest of five children; his brothers Robert, John, David and sister... View Obituary & Service Information

The family of Michael Joseph Kalember created this Life Tributes page to make it easy to share your memories.

Send flowers to the Kalember family.