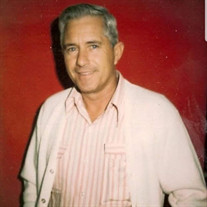 Maurice Robert (Bob) Taylor 01/13/1929 – 07/09/2020 Early morning of July 9th Bob returned home peacefully in his sleep while at home. He was loved and revered by many. He lived a full life of adventure. He was sure to tease all those he cared about and lend a smile. Bob was born to Maurice Riley Taylor and Rosabel Taylor in Mesa, Arizona. He was the first of seven children. He grew up in different towns from the valley to the mountains. He graduated from Snowflake high school in 1947. After a year at Eastern Arizona College he joined the navy in 1949. While on leave after bootcamp he married Ruby McLaws in the Arizona Temple. He then attended mechanic-firearm school at the Naval Training Center in Waukegan, IL. Ruby soon joined him for a short time. He was discharged from the navy and he and Ruby made a home in Heber, AZ. He began working in the sawmill and drove a logging truck in the summer. They sold their home and moved to Winslow, Arizona. He began working for Winslow Auto Supply and for a year also worked for Santa Fe Railroad. Ruby gave birth to a set of twins, Daryl and Darlene. Later came Jerry and then Charlene. Bob and Ruby moved to Pagosa Springs, Colorado and after Charlene had several bouts of pneumonia they decided to move to a better climate and landed in Mesa. Bob began working for the city in the parks and playground department. He later started his career as a police officer on March 15th, 1955. After living in Mesa for a short time Ruby was diagnosed with cancer and passed away in 1965 leaving Bob and their four children heartbroken. Some time later Bob married Marilyn Wosniak, who had two sons. They later divorced after ten years of marriage. In the summer of 1976 he was introduced to Jane Smith behind the workings of his mother and sister Pat. On December 18th, 1976 Bob and Jane were married in Mesa, AZ. Jane had three children Kete, Yolonna, and Arlon. Bob’s four children were grown and out of the home at this time. In 1980 Bob retired as a Captain after 25 years of service as a Mesa policeman. Bob had a life long love of the mountains, outdoors, hunting, fishing, hiking, and camping. These were his favorite things to do with his wife, Jane and their family. He took pride in being one of the best Dutch oven cooks around. He also had the biggest Dutch ovens. Bob and Jane served a 2 year mission for the Church of Jesus Christ of Latter Day Saints at the Bishop’s Storehouse. Bob is survived by his wife, Jane Taylor, children; Daryl Taylor (wife Jean), Darlene Goodwin( Mike- deceased), Kete Smith, Yolonna Foy, and Arlon Smith (wife Paula), 16 grandchildren, and 33 great grandchildren. Bob is preceded in death by his parents, brother Richard “Dick”, sister Marie Brewer, his first wife Ruby, children Jerry Taylor and Charlene Carr and Great Grandson Lucas Losey. Bob was a friend to many and we know this will be a joyous reunion for him and those who have passed before him. He is “absotivley and poslutely” passed on! By the way, anyone want a Pepsi?

The family of Maurice Robert "Bob" Taylor created this Life Tributes page to make it easy to share your memories.

Send flowers to the Taylor family.