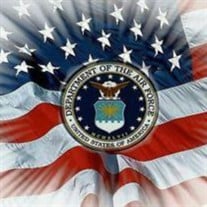 Glendale AZ - Maurice Weir Smith, 94 of Glendale, passed away peacefully, Saturday, July 4, 2020 at home with his family by his side. He was born in Sanford CO on Oct. 24, 1925. His early years were spent on The V Heart Ranch near Sanford. He talked of those years and putting up hay with teams of horses and the Mormon hay derricks that use to be a common sight around the southern part of the Valley. In 1939 his father bought the McKelvey Farm west of La Jara on the Capulin highway. He was very fond of those years, a much more mechanized period he and his siblings welcomed. He loved the farm and the life that it offered into his teen years. He also developed a passion for airplanes. His brother Thales talked about the many airplane models hanging from the ceiling in the bedroom they shared. Thales joked about how many times he got tangled up in “Those d—n Airplanes”. When he started driving and saved enough money he took flight instruction at Bergman Field in Alamosa and received his private pilots license in his late teens. After the war broke out and he graduated from high school in La Jara he enlisted in The Army Air Corps with dreams “like so many young men of the time” of becoming a fighter pilot. He spoke of the challenge of how many friends in the program got “washed out” and the constant threat of being next. Any minor slip up and you were gone! He graduated from Advanced Fighter School and received his Wings Sept. 8, 1945. He had orders to a P51 Squadron in his hands, went on leave for a week after graduation and when he got back from leave all orders were cancelled. The war ended and they didn’t need fighter pilots any longer. He never got to fly a P51. While on military active duty for two more years he continued to ferry military planes across the United States. He enrolled at Northern Arizona College into a Military Program to continue his education. While he was stationed at Williams Air Field in Mesa, AZ he met his future wife Sylvia Jean Hancock of Mesa AZ. He was discharged and they were married on June 5, 1947. After being discharged from active duty he continued to serve in the Air Force Reserve for 27 years when he retired as a Lt. Colonel. Maurice and Sylvia made their home on the family farm partnering with his father. Four children were born to this union. After 14 years on the family farm, needing more production for their survival, Maurice bought a farm in the Carmel District where they farmed until the children finished school. They sold the Carmel farm in 1975 and moved to Alamosa. He began selling and appraising real estate until 1994 at which point he and Sylvia retired and moved to Glendale AZ. While in the valley he flew charter flights for the Alamosa airport. He had a commercial license with an instrument rating and flew for Coors for the weather modification program. During this time some farmers in the area gave him a lot of grief about how he was changing the weather. He retained his pilot’s license and passed flight physicals into his early 70’s. Preceding him in death wife Sylvia, his father Weir, mother Annie, brother Thales, brother Kelly, sister JoAnne and son Michael. He is survived by his children, Vianne (Richard) Coleman of Council Bluffs lA, Michelle Smith of Glendale AZ, and Mark (Markie) Smith of Alamosa CO. His Grandchildren Cari (Jordan) Harger of Overland Park KS, Andrew (Dana) Coleman of Papillon NE, Zachary (Aimee) Smith of Lakewood CO, Cheyenne (Tim) Whipple of Phoenix AZ. There are nine great-grandchildren. The Family requests no flowers or donations please. A celebration of life in Alamosa will be held at a later date. ————Hoping there are airplanes in Heaven ————

Glendale AZ - Maurice Weir Smith, 94 of Glendale, passed away peacefully, Saturday, July 4, 2020 at home with his family by his side. He was born in Sanford CO on Oct. 24, 1925. His early years were spent on The V Heart Ranch near Sanford. He... View Obituary & Service Information

The family of Maurice Weir Smith created this Life Tributes page to make it easy to share your memories.

Send flowers to the Smith family.