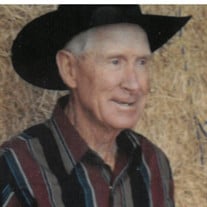 Marion Everett Stewart Jr. B- June 21, 1926 D-July 27, 2021 Everett was born in Northern Arizona, to Marion Everett Stewart (Hap) and Vinnie Gardner Stewart. Everett grew up in the Snowflake area where he attended grade school, worked with his father and competed in rodeos. Everett was raised in a Church of Jesus Christ of Latter Day Saints household where his mother taught him to say his prayers from a young age and he remained a devoted member of the Church his whole life. He was drafted into the US Army towards the end of WWII, he never saw conflict and was not in the Army for a long period of time. As soon as he was home he went to work with his father, building dirt tanks on the Navajo and Fort Apache reservations. It was during this time he reconnected with the woman he would marry, Beulah Hancock. They were married on October 31, 1947 by a Justice of the Peace in Tempe, AZ. They were later married in the Temple of the Church of Jesus Christ of Latter Day Saints in Mesa, Arizona. After they married, Everett and Beulah joined Everett’s father and mother in northern Arizona where they logged for the sawmill in Winslow, Arizona. From there they moved to Oklahoma to ranch and farm. Beulah’s health got bad and they had to move back to the Valley. Everett built a feed yard in Chandler for Producers Livestock. It was at this time he met and started working with Earl and Leroy Johnson. They became partners, forming Johnson-Stewart-Johnson Sand and Gravel where he worked until he retired. However, retirement did not come to Everett very easy. He bought a ranch in New Mexico and was partners in several other ranches in Arizona and New Mexico. He always loved to work with horses and competed in rodeos all his life. When Everett was in his 80’s and slowing down a little, he started making horseshoe art and grow boxes for people. During his lifetime, Everett help create the Arizona Junior Rodeo Association, was a member the Rodeo Cowboy Association (RCA) and the Arizona Rodeo Association and was also a member of the Businessmen’s Rodeo Association of Arizona. Everett will always be remembered as a hardworking, honest, and kind man who was always willing help anyone in need and who never shied away from hard work. Everett was preceded in death by his parents, his wife of 67 years, and one grandson. He is survived by his children, Jimmy (Marianne) Stewart, Cathi (Rex) Lamoreaux, Linda (Darryl) Cogswell, Pamela (Les) Martineau and Patricia (Jay) Larson, Judy Mitchell, and one brother Lynn Stewart, 19 Grandchildren, 46 Great Grandchildren and one Great, Great Grandchild.

The family of Marion Everett Stewart Jr. created this Life Tributes page to make it easy to share your memories.

Send flowers to the Stewart family.