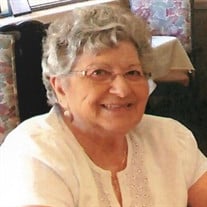 Marie-Ange Hebert transitioned to her eternal life with the Lord on May 30, 2020 at the age of 89. Born in St. Jean Baptiste, Manitoba in August 1930. The first child of Oliva Duval & third child of Wilfrid Duval (previously widowed). Marie's survivors include her sister, Angele Remus & brother Sylvio Duval of Winnipeg, and brother, Roger Duval of San Diego, CA. Preceded in death along with her four brothers, Gerry, Roland, Denis & Leon, who have gone before her. Marie was also preceded in death by her two sons, Gilles and Richard. Marie married her beloved husband, Bernard Hebert of Carey, Manitoba, in June of 1950. They enjoyed 63 years of marriage before Bernard passed away in 2013. They spent the first half of life in their native Canada and the second half in the warm Southwest desert of Arizona. During that time raising seven children, being part of many parishes, activities and clubs in the community. Marie has not only been a daughter, sister, friend, wife, mother, but also a talented artist and traveler of the world, among the many other accomplishments one does pursue during a lifetime, but also someone who took the time to be a Bluebird leader, a Catechist teacher, Eucharistic Minister, Meals on Wheels, choir and many other positions to help a calling within the Catholic church and local communities for most of her life. Truly trying to be a follower of God. Marie leaves to mourn her five surviving daughters, Jocelyne Urgitus of Alaska, Paula Erwin, Louise Kendall, Leonne Miller and Suzette Hebert-Bush of Arizona and their families. She leaves behind 24 grandchildren and 30 great-grandchildren. As per her wishes cremation has taken place. The family will have a private celebration of life as they place her ashes, in a double urn, next to her beloved husband, Bernard, at Mountain Meadows Memorial Park, Payson, Arizona. Date yet to be determined.

Marie-Ange Hebert transitioned to her eternal life with the Lord on May 30, 2020 at the age of 89. Born in St. Jean Baptiste, Manitoba in August 1930. The first child of Oliva Duval & third child of Wilfrid Duval (previously widowed). Marie's... View Obituary & Service Information

The family of Marie-Ange M. Hebert created this Life Tributes page to make it easy to share your memories.

Marie-Ange Hebert transitioned to her eternal life with the Lord...

Send flowers to the Hebert family.