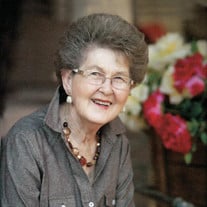 Margaret LeSueur Steverson, born January 10, 1920 on the “ranch” in Mesa, AZ, passed away peacefully at the age of 99 Sunday, Sept 22, 2019. She was shy though raised in an outgoing family environment. Margaret attended Mesa schools until her senior year in high school when she begged her parents, James W. LeSueur and Anna Maria Anderson, to let her graduate from St. Johns High School where she had many relatives. Her classmates from Mesa still included her in all of their reunions. After high school she attended Tempe Normal (ASU). Margaret and husband, Norris Steverson, raised 5 boys, John (Aida), Bill (Karen), Joe (Aurora), Chuck and James (Kathy), and 3 daughters Anne Cook (Harvey), Barbara, and Jenny Townsend (Steve). Besides cooking for a big family, one of Margaret’s favorite pastimes was to scour thrift stores whereby she helped clothe not only her grandchildren and great grandchildren but many more children of friends and needy acquaintances. Her closet is still stuffed with fashionable clothes she rarely paid for with more than a ten-dollar bill. Though shy around outgoing relatives and friends, Margaret seldom went into a store without sharing their family history. If sainthood there be, Margaret will certainly be a shoo-in for the devoted care given to their daughter, Barbara Jan, for most of Barbara’s 47 years. What a great reunion the two of them are having on the other side along with her husband, siblings, and parents. Margaret’s ancestors came from Sweden and the Channel Islands (Guernsey) and one knew it immediately entering into their home or checking out her front license plate. She visited Sweden twice with her sister and the Guernsey once. Later, she and Norris traveled to Europe with an ASU faculty tour. She loved learning about other countries and gave lectures about their culture complete with a sampling of edible delicacies. Margaret was still driving into her 90’s when the family gave her car away. Her mind was her greatest asset. She was not a dancer, a singer or an actor but she knew all the old families of Mesa by first names, who they dated in high school and so on. She was also a walking family historian, going back generations with stories, dates and names. Her mind was strong right to the last and loved to watch “Jeopardy” to test herself. Margaret and Norris were famous for their family, neighborhood, and ASU gymnastics team barbecues. Besides burgers, ribs, rolls, potato salad, there was always homemade ice cream from their 15-quart hand crank freezer that churned out any imaginable flavor. This was possibly partly because the family milked one or more cows for roughly 10 years. They ate well but Margaret was always concerned about her health and figure and that of family members as well. In later years with all the children gone, she was a favorite at the YMCA with the aerobic swimming classes. Until recently one could see her pedaling her 3-wheel bike around the neighborhood or on her hands and knees planting flowers and pulling weeds in her little plot along the front walk.

Margaret LeSueur Steverson, born January 10, 1920 on the &#8220;ranch&#8221; in Mesa, AZ, passed away peacefully at the age of 99 Sunday, Sept 22, 2019. She was shy though raised in an outgoing family environment. Margaret attended Mesa schools... View Obituary & Service Information

The family of Margaret LeSueur Steverson created this Life Tributes page to make it easy to share your memories.

Send flowers to the Steverson family.