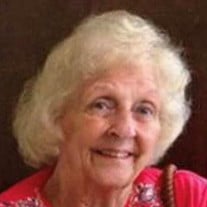 Margaret “Peggy” Lenhart passed away on December 8th, 2021, at the age of 86, in Mesa, Arizona. Her battle with serious medical issues in recent years showed her courage in facing difficult challenges of life, with a warm smile and good sense of humor. Despite the pandemic and its obstacles, she dodged the impact until the end…COVID is what took her from us. As a child, Peggy grew up where she was born in Latrobe, Pennsylvania. She reminisced of her days spent running around with family and friends in the quaint beauty of her hometown. From there her mother, father and two sisters moved to Arizona, a wonderous “Western Frontier” that would prove to be her home for the better part of 70 some years. She met Donald Fletcher Sr. and raised three rambunctious boys. All served in the military and grew up to be strapping men, who would move mountains for her. When she met Frank Lenhart, to say her life was changed forever, is an understatement. Their love was unique and endured many obstacles. In her later years, there wasn’t a cruise she hadn’t been on – nor a continent she couldn’t share the stories of. She truly loved to travel, her many trinkets, collected from every spot, tell the tale. She will be missed a great deal. Peggy was the mother of three sons, Don Jr., Mark and Mike. She is survived by her son Donald Fletcher Jr, his wife, their children Erin, Jeremiah, Noah; Mike’s son, Ben; Her great grandchildren: Mark, Austin, Kaitlyn, Kathryn, Luke, Jesse and David. She meets in heaven her husband Frank Lenhart, her sons Mark and Mike, her father, mother and three sisters. She will be placed at Frank’s side, in the Mesa Cemetery, at 10:00am on December 16th, 2021.

Margaret &#8220;Peggy&#8221; Lenhart passed away on December 8th, 2021, at the age of 86, in Mesa, Arizona. Her battle with serious medical issues in recent years showed her courage in facing difficult challenges of life, with a warm smile and... View Obituary & Service Information

The family of Margaret Jean Fletcher Lenhart created this Life Tributes page to make it easy to share your memories.