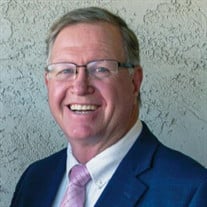 Lance Waine Ipson, 60, passed away unexpectedly on July 24, 2020. Lance was born March 12, 1960 in Salt Lake City, Utah to Gerald and Dorothy Ipson. He grew up in Murray and South Jordan, Utah and graduated from Bingham High School. He served as a missionary for The Church of Jesus Christ of Latter Day Saints in the Spain Sevilla Mission. Upon his return he attended Brigham Young University where he met his wife, Valerie Giberson. They were sealed in the Jordan River Temple in 1982. Lance ultimately graduated from Utah State University with an accounting degree. Lance and Valerie raised their eight children in Utah, Israel, and Mesa, Arizona. Lance valued marriage and fatherhood as vital to God’s plan for His children on earth. Fond memories include regular date nights, family dinners and birthdays, laughing and playing games, vacations, and family reunions. Getaways with his wife were important to him, with trips to Spain and Costa Rica among the most memorable. Lance was a cherished son, brother, and friend. He was loyal to his childhood friends. He had a great love for his parents and siblings, and since the death of his father was an amazing support to his mother. He loved his ancestors, and genealogy and temple work were fundamental in his life. His love for the Lord and the gospel of Jesus Christ defined Lance as a person. He sought to exemplify the Savior in his daily life and in his interactions with others. He enjoyed serving in the Church and held numerous callings mostly in scouting and the young men’s organization. He also served on the High Council, in a branch presidency, and as a bishop twice. Lance was currently serving as bishop in a Spanish-speaking ward. He loved sending missionaries off, ministering to others, and studying the gospel. Lance was known for his incredible work ethic. He began his accounting career as an auditor with the Defense Contract Audit Agency which eventually took his family to Israel for over two years. He spent seventeen years in the accounting and sales tax departments of Freeport-McMoRan in Phoenix and Miami, AZ where he enjoyed traveling internationally and using his Spanish. He said he “failed at retirement” and went to work for Viad Corp. and was currently an employee at Mitel in Mesa as an Indirect Tax Manager. Lance played sports in school and was physically active all of his adult life. He ran two marathons and hiked the Grand Canyon rim to rim. He loved camping and fishing, especially in the High Uintas of Utah. He grew up attending BYU basketball games with his dad, and proudly supported BYU and USU sports, the Utah Jazz and the Arizona Diamondbacks. One of his greatest joys came from supporting his children and grandchildren in every sport and activity possible. He organized family sporting activities such as basketball and baseball games. He launched the Ipson Family & Friends 5K. Lance enjoyed working in the yard, raising chickens, and gardening. He valued education and was thrilled that his children followed his example of seeking college degrees. Survived by his wife, Valerie, his eight children, Jarom (Starla), Landi Johnson (Lance), Megan, Justin (Anatosha), Kara Willford (Tommy), Kristen Williams (Nate), Jordan (Sarah), and Kylie, and seventeen grandchildren, as well as his mother, Dorothy, and four siblings: Gerald Jr., Lynette Vawdrey, Joseph, and Natalie Muterspaugh. Preceded in death by his father, Gerald Ipson. In lieu of flowers, please donate to the Pueblo Ward Mission Fund in c/o Bishop Ipson at 8811 E. Florian Ave, Mesa, AZ 85208.

Lance Waine Ipson, 60, passed away unexpectedly on July 24, 2020. Lance was born March 12, 1960 in Salt Lake City, Utah to Gerald and Dorothy Ipson. He grew up in Murray and South Jordan, Utah and graduated from Bingham High School. He served... View Obituary & Service Information

The family of Lance Waine Ipson created this Life Tributes page to make it easy to share your memories.

Send flowers to the Ipson family.