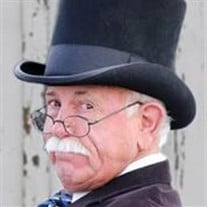 Kenneth James Anderson, Jr., beloved father, brother, friend and real estate legend, passed away December 29, 2019 in his Mesa, AZ home from heart failure. He was 69. Born March 16, 1950 in Cheyenne, WY to parents Alice and Kenneth Anderson, Sr., Ken had a tough start in life. He was born with a club foot. After corrective surgery, weeks of wearing plaster casts and braces, and doing painful tendon stretching exercises he ended up with different sized feet but prevailed as the man of character so many have come to know and love today. In 1957, Ken moved to Denver, CO with his parents and younger brother George. It was during this time that he became George’s main playmate, companion, and minder, adventuring in the neighborhood, collecting pet animals, rigging rafts and wagons, and getting into trouble. Kenneth excelled as an Eagle Scout and jazz saxophonist before graduating from Ranum High School in 1968. He then worked his way through Northeastern Junior College in Sterling, CO and completed two years at Colorado State University (CSU) in Fort Collins, CO before marrying his first wife, Brigitte, becoming Phi Delta Epsilon’s first ever sorority house dad, and getting involved in state politics to run a gubernatorial race. After the candidate dropped out, Ken continued to attend night school, graduating with his bachelor’s degree in history in 1974. Kenneth’s work ethic and career developed early on working for the college paper, meat-packing plant and odd jobs in construction. He was especially fond of his summers in college working for Chevron Oil Company at Moose Lodge in Yellowstone National Park, fending off bears and spending evenings cutting loose with friends and young women. He once said to one of his daughters, “If I wasn’t making money and having fun, it wasn’t worth my time.” Ken loved working and always did a good job. His personality really came out when he was dealing with people. After becoming Vice President at World Savings and Loan straight out of college, Ken worked at several real estate companies in Fort Collins, making a name for himself as the go-to guy for buying or selling a home. In 1985, he purchased the RE/MAX Advantage franchise along with his partner Phil Risch. They successfully operated and grew that business until they sold it to Gene and Carol Vaughan in 1987. Around this time, Ken married Pamela, and started the family he always wanted, gaining daughters Lisa and Caitlin, and a son Samuel. Family vacations, holidays and celebrations as well as watching his children grow and excel were things Ken loved tremendously. Kenneth went on to become President of the Fort Collins Board of Realtors three times (1985, 1995, 2011), playing an integral part in state and national real estate governance and championed the evolving tech side of real estate. Ken remained with RE/MAX for more than 40 years, selling homes along the front range, making life-long friends and mentoring up-and-coming Realtors. More than half of those years were spent alongside his partner and close friend, Amanda Weaver, who continued to work with and support him until his final day. After 60 years in Colorado, Kenneth made his final move to lower altitudes and warmer weather in Mesa, AZ, quickly making friends with people in the neighborhood and involving himself in subdivision politics. While his health declined, he continued to push himself to achieve. Ken spent more time visiting with family and friends, walking his dog Cosmo, driving for Lyft and Uber and keeping his fingers on the pulse of real estate. Once a Realtor, always a Realtor! And ever an entrepreneur. Ken Anderson was truly one of a kind. Funny. Joyful. Sarcastic. Ornery. Caring. Generous. Loving. Demanding. Playful. Dedicated. Relentless. He loved his Cadillacs, his scotch, his big real estate deals … and those damn cigarettes. He especially loved his three children, except when they were fighting in the back seat. He was a tough, but loving and devoted father, friend, mentor and teacher to many. Ken would help anyone who needed it. In fact, his old partner Phil Risch once said, “Ken will give you the shirt off his back. However, he may tell you when and where to wear it!” Ken is survived by his brother George Anderson, daughters Lisa Ann Rigor and Caitlin Marie Carlson (Brett), and his son Samuel William Anderson. He lives on in our hearts and through our lives. Live long and live well! A memorial reception for Ken will be held at a later date with details to follow. Arrangements are by Meldrum Mortuary & Crematory, Mesa, AZ. Please direct messages and inquiries to [email protected] Online condolences may be expressed at https://www.meldrummortuary.com/obituaries/ or facebook.com/ken.anderson.545.

The family of Kenneth James Anderson Jr. created this Life Tributes page to make it easy to share your memories.

Send flowers to the Anderson family.