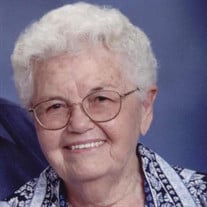 June Kimball Alldredge June 26, 1921 - November 7, 2020 June Kimball Alldredge, 99, of Mesa, Arizona, passed to the other side of the veil on Saturday, November 7, 2020. June impacted many lives with her love of music and zest for life. Her parents, Gordon and Clara Kimball, were both notable musicians. June learned from them to have no fear of sharing her music and performing in song, piano, and organ. She was the youngest in the family. Her older siblings were Olive, Fern, and Gordon Curtis. June lived and attended school in Tucson, Arizona. Her college years were spent at the University of Arizona (Tucson, Arizona) and Brigham Young University (Provo, Utah). On December 24, 1941, she married Miles Isaac Alldredge in the Mesa Arizona Temple. They were blessed with four children—Antoine Don (Tony), Fay, Diana, and Jean. Miles was primarily a school teacher in Mesa. However, he carried several jobs to make it possible for June to remain in the home. She was an incredible homemaker, seamstress, cook, and lover of nature. She was always active in The Church of Jesus Christ of Latter-day Saints, serving in leadership positions (president of the YWMIA, president of the Relief Society, counselor in ward and stake Primary, etc.) and sharing her abundant social skills. June simply loved being with people. And they loved being with her. Their home was in Mesa. In addition however, Miles and June built a cabin in Strawberry, Arizona. They spent time there whenever possible, affording many happy times for the family. They also made many road trips and camped and fished often. Miles and June served as missionaries at the Mormon Battalion Visitors Center in San Diego, California, from 1983 to 1985. Later they served as ordinance workers in the Mesa Arizona Temple and missionaries in the Mesa Family History Center. At the same time they were serving as temple workers in Mesa, they held ward and stake positions in Pine, Arizona. June was not only an amazing, loving mother, she continued to give as the grandchildren arrived. She knitted or crocheted sweaters for the newborns and afghans as the grandchildren aged. She made hot pads, washcloths, Christmas stockings, and crafts of all kinds. June had 32 grandchildren, 120 great-grandchildren, and 24 great-great-grandchildren. June is survived by her four children: Tony Alldredge (Lorraine), Fay Klingler (Larry), Diana Ralphs (Michael), and Jean Smith (David). She will be greatly missed by everyone who knew her. The viewing will be held on Wednesday, November 11, 2020, from 5:00 p.m. to 5:45 p.m. at the Mesa Lehi Stake Center (1430 N. Grand, Mesa, Arizona). Funeral services will follow at the same location at 6:00 p.m. The funeral will also be carried virtually through Zoom. Burial will be Thursday, November 12, 2020, 10:30 A.M. at the Mesa Cemetery.

The family of June Kimball Alldredge created this Life Tributes page to make it easy to share your memories.

Send flowers to the Alldredge family.