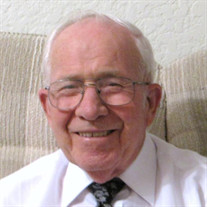 Joseph Harvey Pew, 98, of Mesa, Arizona, died peacefully on September 13, 2021 at his home in Mesa, Arizona. He was surrounded by his wife of 74 years, Elizabeth, and six children. Joe was born on January 26, 1923, to Walter Harvey and Anna Jane (Kleinman) Pew in Mesa, Arizona. He married Elizabeth Ann Johnson on April 10, 1947. They recently celebrated their 74th wedding anniversary. Joe was born on an 80-acre dairy farm that was located at the intersection of Alma School Road and Main Street in Mesa. Much of the dairy farm was later subdivided into the neighborhoods that now stand in that area. Upon marriage, Joe and Elizabeth lived in the first house that was built in those new neighborhoods, and have lived there since. As a result, he lived on the land that formed the Pew dairy farm from the time he was born until the day he died. Joe served in the Air Force during World War II. Of the 16,00,000 men and women who served in the war, he was one of only a few hundred thousand veterans remaining. Joe worked at Marsh's Auto Shop until 1955, when he began working for Motorola. He retired from Motorola in 1987 after working 32 years. At Motorola, he worked on equipment that was sent to Mars and Venus, as well as satellites that circled the earth gathering weather information. Joe enjoyed gardening, photography, and family history work. He and Elizabeth published several books of family stories and family history information. Joe was a lifetime member of the Church of Jesus Christ of Latter-day Saints. He and Elizabeth were members of the Beverly Ward (formerly Mesa 14th ward). Joe served as a bishop, a high councilor, Maricopa Stake Patriarch, a sealer for the Arizona Temple and served missions with Elizabeth in Mississippi (1988-1989) and Massachusetts (1995-1997). Joe is survived by his wife, Elizabeth, and children Terry Pew, Cathy (Ed) Shepherd, John (Maxine) Pew, David (Laura) Pew, Paul (Cheryl Ann) Pew and Mark (Tammy) Pew. Joe and Elizabeth have 33 grandchildren and 73 great-grandchildren. He is also survived by one brother, Karl Pew. He was preceded in death by his parents and nine siblings. Visitation will be Saturday, September 18 at 10 AM at Beverly Ward at 1054 West Second Street in Mesa, Arizona. Due to an abundance of caution, the visitation will be limited to family members. The funeral service, which is open to the public, will be at 11 AM at the same location. Masks are encouraged. The funeral services will be relayed by electronic means to those interested in watching remotely at Zoom.com 884 1699 3684.

Joseph Harvey Pew, 98, of Mesa, Arizona, died peacefully on September 13, 2021 at his home in Mesa, Arizona. He was surrounded by his wife of 74 years, Elizabeth, and six children. Joe was born on January 26, 1923, to Walter Harvey and Anna... View Obituary & Service Information

The family of Joseph Harvey Pew created this Life Tributes page to make it easy to share your memories.

Send flowers to the Pew family.