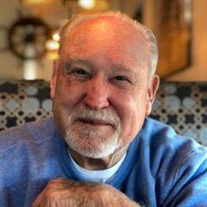 John Richardson Haley, 79, of Chandler, Arizona passed away on November 14, 2019. He was born in Lawrence, Kansas on January 24, 1940 to Katherine L. Haley (Pohl) and John P. Haley, Jr. Raised primarily in Kansas City, Missouri he also spent several memorable years with his paternal grandparents in Leavenworth, Kansas. As a kid, he played football, baseball and was a Golden Gloves boxer. In 1957 he joined the U.S. Marine Corps and served until 1960. John was profoundly shaped and influenced by his experiences in the Marine Corps. Not long after being discharged he began a 30-year career with the Federal Government. In 1970 he married Audra Louise Haley (Thomas) and the couple welcomed their first daughter, Kathleen Elizabeth in 1972. In 1973 John earned a B.A. in Political Science from California State University at Stanislaus. The couple’s youngest daughter, Rebecca Nicole, arrived in 1975. His work took the family from California to Texas, Pennsylvania, Missouri and, finally, to Arizona where he retired in 1991. In 1996 he began working for an ocean transportation company, Matson, where he met Elena Zent and the two were married in 2004. He retired a second time in 2009. John, AKA Rich and JR, was the life of the party and the person to call if you were in trouble. He was a boxer, Marine, golfer, marathoner, lifelong Chiefs and Royals fan, gentleman, father, friend, husband, provider, patriot and lover of music- boasting that he knew every word to every song ever written. He was, above all, a loyal man. Loyal to his family, to his friends, to the Corps, to his country. He was preceded in death by his parents and brother Dennis M. Haley (d. 2018 Placerville, CA). He is remembered with love by his wife, Elena Zent Haley, his daughter Kate Haley, his daughter Nicole (Tom) Akins, his step-son Zachary Zent, his grandchildren Dylan and Belle Akins, his former wife Audra Haley, nieces Denise Rangel (Haley) and Cheryl Harmon (Haley), nephew Steven Haley, and his great-nephew Michael Rogers. Services will be held at Leavenworth/Fort Leavenworth National Cemetery in Leavenworth, Kansas on December 13, 2019 at 2:30pm.

The family of John Richardson Haley created this Life Tributes page to make it easy to share your memories.

John Richardson Haley, 79, of Chandler, Arizona passed away on...

Send flowers to the Haley family.