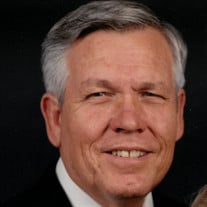 John Lawrence Allen died peacefully in his sleep on August 28, 2019 after a long struggle with cancer. He was born March 25, 1941 in Brownwood Texas to Elijah Cecil and Marilla Solomon Allen. His father was stationed there for a time. John had two older brothers, Norris and Terry, and a sister Eleanor. A few years later a younger Brother, Dwight, was added to the Family. John spent most of his life growing up in Winslow, Arizona where he went to grade school through high school. After graduating from high school, he spent two summers working for the Santa Fe railroad in Winslow and attended Brigham Young University in Provo Utah during the fall and winter 1959-61. He served a two-year Mission for his church in England and Wales. After his return he continued his schooling at BYU where his cousin introduced him to her friend, Janice Webster. They were married in the Mesa, Arizona Temple on January 28th, 1965. They both continued their schooling until John graduated in May, 1967 with a bachelor’s degree in mechanical engineering. Their first child, John Brady, was born March 14, 1966. John took a job in Phoenix at Air-Research Manufacturing Co. and worked there his entire career-- 33 years. He had a job he loved the whole time he worked there. His job was analyzing and designing parts for aircraft, submarines, missiles and automobiles. During this time, they raised their nine children. He was also very actively involved in his church, serving in many different roles, including Stake Clerk and Bishop. He enjoyed several recreational activities including auto mechanics, back-packing, racquetball, rubber band powered airplanes, gardening, and constant work trimming, mowing, and weed eating their acre of property. Since retiring he enjoyed traveling with Janice including several cruises and often went to visit children and grandchildren who live in several different states. With his wife Janice he served several local service missions as well two full time missions; eighteen months each in Philadelphia and in Montreal. Both missions were for Family Search preparing and digitizing administrative documents, (similar to wills). The digital images are in searchable data bases on the internet for use by family historians and genealogists. John was preceded in death by his oldest child Brady, and their fifth child, Brandt. John wrote that the hardest decision he ever had to make was allowing Brady (14 at the time) to be placed outside our home. He had difficult behavior resulting from developmental disabilities and multiple types of seizures. Brandt served a mission in Canada, attended BYU, married Sarah Sandstrom, and died just short of their first anniversary. Their daughter, Sierra was born three months later. The remaining posterity are Corey (Courtney), Timothy (Shirell), Justin (Mindy), Marilla (Casey Olson), Valora (Eric Hintze), Amber (Richard Heywood), Tyler (Deborah). He also has 41 grandchildren, (two deceased) and three great- grandchildren. Services will be held Saturday September 7th at 10:00 A.M. at the LDS chapel located at 2265 S. Hawes Rd, Mesa Arizona. There will be a private family viewing preceding the service at 9:00 A.M.

John Lawrence Allen died peacefully in his sleep on August 28, 2019 after a long struggle with cancer. He was born March 25, 1941 in Brownwood Texas to Elijah Cecil and Marilla Solomon Allen. His father was stationed there for a time. John... View Obituary & Service Information

The family of John Lawrence Allen created this Life Tributes page to make it easy to share your memories.

John Lawrence Allen died peacefully in his sleep on August 28,...

Send flowers to the Allen family.