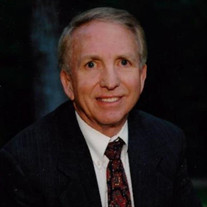 On Saturday, July 24, 2021, Joe Virgil Palmer passed away at age 82. Joe was born in Mesa, AZ, August 12, 1938, to Newel Virgil and Pauline Moody Palmer. He married Ellen Jones in 1967 and they have five children—Lisa, Scott, Eric, Amy, and Steven. Joe served a two-and-a-half-year mission for the church of Jesus Christ of Latter-day Saints in Uruguay from 1958-1961. Upon returning home, he received a Bachelor of Science degree in Business and Accounting from Arizona State in 1964 and became a CPA in 1966. From 1964 to 2019, Joe worked as an accountant, owning his own practice since 1977. That Joe valued hard work was evident throughout his life. A few of his many chores and jobs included milking the family cows morning and evening, rain or shine (he admitted being very glad when the family got rid of those cows), delivering papers, and working on his uncle’s farm. Once while collecting for his paper route, Joe saw an 18-month-old boy floating face down in a canal. Joe grabbed the boy by the shirt and pulled him out, saving the boy’s life. Understated as always, Joe explained, “Anyone would have done the same thing.” A lover of the outdoors, Joe’s passions included water skiing, hiking, snow skiing, and camping. He also loved music; Joe played the piano himself, and all his children play instruments. He loved to listen to them and attend their concerts. Joe served as treasurer for several community groups including the Arizona Cello Society, the Symphony of the Southwest, and the Rotary Club where he received the Rotarian of the Year Award and became a Paul Harris Fellow with Rotary International. He is preceded in death by his parents, sisters Nulyne and Julie Ann, and brothers Ronald, Douglas, and Richard. He is survived by his sister Louise, brother David, his five children, eleven grandchildren, one great-granddaughter, and a large extended family. A funeral service will be held on Friday, August 6, 2021, at the Church of Jesus Christ at 1050 W. Grove Parkway at 10:00 a.m.(https://zoom.us/j/95113746909). There will be a public viewing beginning at 9:00. Interment at Mesa Cemetery immediately following the funeral services.

The family of Joe Virgil Palmer created this Life Tributes page to make it easy to share your memories.

Send flowers to the Palmer family.