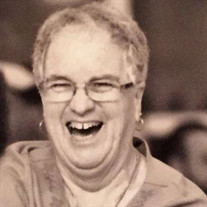 Jean Marie Hunter 1941-2019 Far too soon, the light that was Jean Marie Hunter has gone out in this world. She slipped quietly away on July 24, 2019 at the age of 77. Slipping away quietly was not a mode that was familiar to Jean. She was larger than life and louder than life. Her yearbook described her as “witty” and “always lots of fun” when she graduated from Cranford (NJ) High School in 1959. Indeed she was. Her mother used to say Jean was “chock full of personality.” People consistently sought out her company, and throughout her life, she used her humor to make her way in the world. She enjoyed studying accounting in high school, and in her long working life—she was employed almost continuously from her high school graduation until her final retirement 51 years later—she put her skill with numbers to good use. She worked in the credit department of Goerke’s Department Store in Elizabeth, NJ, and then at Boyle-Midway and NJ Bell, both in Cranford, NJ before following her heart to California in 1967. Once there, she found a professional home at Mobil Oil where she remained for more than 25 years. After moving to Mesa, AZ, Jean sought out the same kind of work she had done so well for so long, this time beginning in 1997 at Phoenix Fuel Company in Phoenix, which later became Western Refining. She worked at Western in their Tempe facility until her retirement in 2010. Jean always had an extensive network of friends, and while living in Los Angeles, she met Ulrike Straub who grew to be her closest friend through several decades. By the mid-1990s, Ulrike had moved to Mesa, AZ to accommodate her husband’s work, and after Jean retired from Mobil, she too moved to Mesa where she lived until her death. Over the years, Jean became both Godmother and surrogate grandmother to Urike’s two sons Eric and Michael. No one meant more to Jean than those two boys. It almost literally broke her heart when Michael was killed in a highway accident in 2016. She continued to dote on Eric, and when he married, on his wife Erika and her son Jacob as well. Ulrike and her husband Friedrich, Eric and Michael were truly family to Jean, including her in their lives and supporting her as her health began to fail in later years. Jean loved to travel, and she enjoyed several European trips, especially through England, Germany, Italy, and France. New York City was magic for her, in later years as a place to enjoy great theater, and once when she was young and courageous, as a place to witness the ball drop in Times Square on New Year’s Eve. As a child and a teenager, she enjoyed family vacations in Manasquan and on Long Beach Island at the New Jersey shore, a tradition she and her sister revived in recent decades. Jean felt that the NJ shore was her true “happy place.” In recent years, Jean could be relied upon to post and e-mail notices about accidents, threats, and weather alerts to her family back East any time the internet even hinted at a problem or a potential snowfall or sometimes even a routine rain shower on the East Coast. She loved fiercely, and she wanted to be sure that those she loved would remain safe, so she notified them about the danger. Over and over again. And again. (And again.) In reflecting on her life, Jean felt great pride and satisfaction about the way she was able to determine her own path. She went where she pleased, and she enjoyed good food and good company. She read voraciously, becoming knowledgeable in many areas. As far as she could, she avoided disagreeable situations and disagreeable people, patience not appearing on the list of her virtues. She had little tolerance for injustice, and she worked for and donated to many causes over the years. In the early 1970s, she worked actively with the Los Angeles chapter of NOW. More recently, she followed several animal rescue organizations, and she consistently supported her sister’s high school as a way to subsidize high quality education for young women. Her strong will sometimes crossed the line into stubbornness, a shortcoming those around her could almost always forgive. She more than compensated for it with her loving, expansive spirit. She was endearing and maddening at one and the same time—truly human. She loved animals, and when she passed, she was no doubt greeted by an army of beloved pets who were waiting for her at the Rainbow Bridge led by Chipper, her childhood dog, and including the Miniature Pinscher who was her 8th grade graduation gift, and the more than 20 cats she lovingly cared for over the past 50 years. The cats she leaves behind—Mitzi Marie and Max—are clearly mourning for her. She was one of a kind, and her passing leaves an unfillable gap. Jean was predeceased by her parents, James and Ruth Hunter, her Godparents, William and Gertrude Hougardy, her close friend Friedrich Straub, and her beloved Godson Michael Straub. She is survived by her sister and brother-in-law Kathleen Hunter and Art Leyenberger, her closest friend Ulrike Straub, her Godson and his family, Eric and Erika Straub and Jacob Dedon, and many cousins, including Jacqueline Dukes Mueller, Virginia Dukes Marconi, and Amy Mueller, her wife Charity Randall, and their son Gabriel Randall. Those who feel inclined can honor Jean Marie through donations in her name to either the Gentle Barn Foundation (www.gentlebarn.org) or to Mother Seton Regional High School in Clark, NJ (www.motherseton.org). Celebrations of Jean’s life will be held at a later date in both Arizona and New Jersey.

Jean Marie Hunter 1941-2019 Far too soon, the light that was Jean Marie Hunter has gone out in this world. She slipped quietly away on July 24, 2019 at the age of 77. Slipping away quietly was not a mode that was familiar to Jean. She was... View Obituary & Service Information

The family of Jean Marie Hunter created this Life Tributes page to make it easy to share your memories.

Send flowers to the Hunter family.