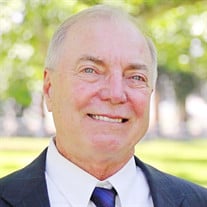 James Leo Foran James Leo Foran Jr. (Jim) passed away unexpectedly on Saturday, January 25, 2020 at the age of 69 in Oro Valley, Arizona with his long-time companion Kimber Russell at his side. Jim was born in 1950 in Endicott, NY, to James and Margaret Foran and lived his early years in Vestal, NY. In 1963, he moved to Mesa with his family, attending the Mesa schools, including Westwood High School (Class of 1969). He graduated from the world-renowned Massachusetts Institute of Technology (MIT) in 1973 and went on to become a pioneer in Silicon Valley where he secured 11 patents and contributed to the advancement of medical technology and computer-generated imagery (CGI). His most notable contributions were to CT scanners, Silicon Graphics workstations, and the Nintendo 64. Jim raised two children with his wife Anne. Following a divorce, Jim met his partner Nancee Knutson with whom he shared 20 years of adventure. Jim loved being in nature. Upon retirement he dedicated his time to preserving open spaces in the San Francisco Bay Area by serving as a Santa Clara County Parks Commissioner, the Director of the Santa Clara Valley Open Space Authority, and most recently, a Bay Area Ridge Trail Board Member. He also supported native plants and national parks in Arizona. He was a good man with an iron will and an old-fashioned hard work ethic. Known for his beautiful smile and a heart too big, he lived his life in his own way, and he lived it fully. Jim is survived by his children, Peggy Kellen (Mark) and Patrick Foran (Kiera), his two grandchildren, five siblings; Barbara Willan (Peter), Joseph Foran, Jeanie Welch (Mark), Charles Foran, Kathy Shea (Brian), and many nieces, nephews, cousins and friends. He was preceded in death by his father and mother, James Foran Sr., and Margaret Foran, his brother, Robert Foran, and his partner, Nancee Knutson. Jim's family respectfully requests that in lieu of flowers, donations be made in his name to the Bay Area Ridge Trail: https://connect.clickandpledge.com/w/Form/dcebafa5-691c-49d9-a774-0035aa74b5a4 A memorial service will be held at Meldrum Mortuary, 52 N. Macdonald St., Mesa, AZ 85201 on Saturday, February 22nd at 4:00 PM.

James Leo Foran James Leo Foran Jr. (Jim) passed away unexpectedly on Saturday, January 25, 2020 at the age of 69 in Oro Valley, Arizona with his long-time companion Kimber Russell at his side. Jim was born in 1950 in Endicott, NY, to James... View Obituary & Service Information

The family of James "Jim" Leo Foran Jr. created this Life Tributes page to make it easy to share your memories.

Send flowers to the Foran family.