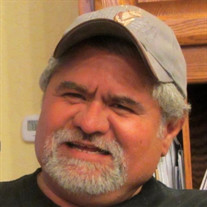 Ishmael "Ish" Fierro, 58 Passed away December 2021 Ishmael was born in Carlsbad, New Mexico and moved to Mesa, AZ with his parents at the age of 11. He Attended Lindburg Elementary, Mesa Junior and graduated from Mesa High School in 1982 Ish... View Obituary & Service Information

The family of Ishmael Hernandez Fierro created this Life Tributes page to make it easy to share your memories.

Send flowers to the Fierro family.