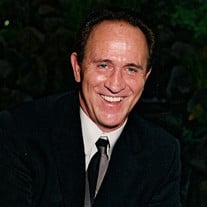 Thundering hooves beat a rhythm that urged his body forward in the stirrups. The ground blurred beneath the jockey as the horse moved swiftly round the bend. Back flat, hips high he continued to coax, and while the animal picked up speed, the jockey’s muscles tensed knowing the finish line was near. Just as with his first horse race in Salina Utah, Jim raced brilliantly to the end. After a two-week struggle with sepsis following surgery for pancreatic cancer, Henrie James “Jim” Veater approached the finish line and departed this life Sunday January 9, 2022. Born to Clark and Dora Veater on July 23, 1946, in Panguitch Utah, Jim was seventh of eight children. He grew up in small town Salina, Utah, where his horse racing career began. Racing in over 1000 races in California, Utah, Nevada, and Arizona, he was a professional jockey from ages sixteen to twenty-two. These years were among his favorite memories; he loved working with his dad, who was a racehorse owner and trainer. Another great friend from these times was Gabby Moore. A natural athlete, Jim played several other sports with his lifelong friends Bruce Shaheen and David Hatch. These three stayed together from grade school through college. A talented wrestler, Jim received a scholarship to Southern Utah State University in Cedar City, where he even qualified to compete in nationals. He also competed in trampoline and on the dive team. It’s no surprise he could win anyone in a walking handstand contest. Jim had a charismatic personality, a zest for life, and a knack for having fun. In fact, Jimmy was always having fun. The caption under his high school yearbook photo read “full of mischief and merriment”. All this useful energy was later devoted to his family, as Jim was blessed throughout the rest of his life to be a father to ten kids. Jim enjoyed being a dad. He loved spending time with his kids and grandkids. He loved videoing them and annoying them with his constant picture taking. After Jim’s move to Arizona, he became synonymous with Big O Tires for many years. He owned the first store in AZ to break a million dollars in annual sales. He was also the first owner to break two million in sales. Yet these accomplishments didn’t mean as much to Jim as his ability to help others. Nobody followed more closely the Savior’s commandment to love your neighbor. He would give the shirt off his back if someone wanted it (This literally happened once). Jim was always excited to help someone who needed it. He would never miss an opportunity to serve by fixing cars or giving free tires or giving a job to anyone down on their luck. Equally important to Jim was his Big O family. He loved helping and training others who he worked with to gain skills and achieve greater goals. He was a believer in second chances and inspired many people to clean up and realize their life’s potential. In later years life gave him his own second chance when he met Rachel, the love of his life. He met her at Big O and their first date was to the horse races. His charming big-hearted personality won her heart. They were married August 28, 2002, and then sealed as eternal companions. Jim’s love of music was evident throughout his entire life. From his early days singing with his siblings, to marrying a beautiful country singer, Jim appreciated the joy music could bring. His family loved to hear him play his guitar and sing his favorites. Also, you could win five dollars if you could name the artist of any song Jim would play. Jim encouraged his kids and grandkids to develop their own musical talents. He provided a passionate and enthusiastic audience for their many musical performances. You finished the race Pops, Dad, Papa Jim, Jimmy Bear- enjoy the winner’s circle. The funeral service will begin Wednesday, January 19th, 2022 at 10:30am at the Church of Jesus Christ of Latter-Day Saints, 1150 N. Lindsay Rd, Gilbert, AZ 85234. Interment will follow the funeral service at the Pine Cemetery. "For those who would like to view the service virtually, please use this link: https://youtu.be/XoUj2iLmZvA"

Thundering hooves beat a rhythm that urged his body forward in the stirrups. The ground blurred beneath the jockey as the horse moved swiftly round the bend. Back flat, hips high he continued to coax, and while the animal picked up speed, the... View Obituary & Service Information

The family of Henrie James Veater created this Life Tributes page to make it easy to share your memories.

Thundering hooves beat a rhythm that urged his body forward in...

Send flowers to the Veater family.