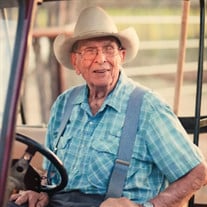 Glenn E Scott, age 93, passed away on the 18th of August 2019. He was born on the 4th of January 1926 to Walter and Mary(Coons) Scott in Goodyear, Arizona. Which at that time was located south of Chandler, Arizona. He started school in Gilbert, Arizona. Being born of a farmhand he learned to milk cows by hand at the age of 5. He also learned to handle a team of horses at a young age. In seventh grade he took a music class in school and realized he could sing. A talent that served him and many others throughout his life. While attending Mesa High School he met Elva Merkley and was smitten by her beautiful smile. With his blue eyes, brown hair and mischievous ways he convinced her to marry him on the 12th of May 1944 in the Mesa Arizona Temple. From this union they were blessed with six children. Glenn worked many jobs, until in 1951, he began working for the Salt River Project Water Department. He retired as a Water Master after 37 years in 1988. Having a devout testimony of Jesus Christ, he served faithfully in many callings in the Church of Jesus Christ of Latter-Day Saints including being a Temple worker, Director of the Mesa Family History Center and serving a mission to Scotland with his sweetheart, Elva. He was preceded in death by his wife of seventy-four years, Elva, granddaughter Heather, sisters Rhea, Veda, Thelma, Ruth and brother Walter. He is survived by his children; Cecil Scott(Margaret), Jon Scott, Elaine Stewart(Gary), Betty Rucker(Doug), Wayne Scott(Dawn), and Annalee Shumway(Phil); 31 grandchildren, 49 great-grandchildren and one great-great-grandchild. He is also survived by sisters; Thora Cluff, Ina Ray, LaVerne Done and brother; Howard Scott. There will be services held in the L.D.S. Church at 830 E. Lehi Rd, Mesa, Az. A viewing will be held August 27,2019, 6:30-8:30 pm in the Relief Society room. Funeral Service will be held at 10:00 am August 28, 2019, with no viewing prior. A family burial will have been held at 9:00 am at the Mesa Cemetery.

Glenn E Scott, age 93, passed away on the 18th of August 2019. He was born on the 4th of January 1926 to Walter and Mary(Coons) Scott in Goodyear, Arizona. Which at that time was located south of Chandler, Arizona. He started school in Gilbert,... View Obituary & Service Information

The family of Glenn E. Scott created this Life Tributes page to make it easy to share your memories.

Send flowers to the Scott family.