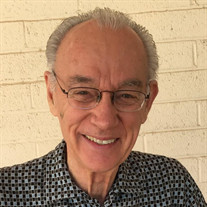 Fritz Hugo Johansson, beloved husband, father, brother and friend passed away on Friday, January 7, 2022, from complications due to Lewy Body Dementia and Parkinsonism. Hugo was born November 18, 1938, in Eskilstuna, Sweden. His parents were Carl Fritz and Astrid Johansson. He was a member of the Church of Jesus Christ of Latter-day Saints and spent his first 8 years living in the Stockholm Mission Home, as his father served as Acting Mission President during the Second World War. In 1947 the family emigrated to the United States and lived in Salt Lake City, Utah. Hugo went to school at Lincoln Jr. High, where he was involved in Junior Achievement, and to South High School, where he distinguished himself on the track team. During this time of his life, he also tried his hand at oil painting and created some beautiful pieces. He spent summers working in Yellowstone, where he loved to hike into the back country to go fishing, with his best friend Clair Carling. Hugo then attended the University of Utah. He was called on a 2 ½ year mission to Sweden, for the Church of Jesus Christ of Latter-day Saints, and upon his release, he returned to the University of Utah and graduated with a BS degree in Electrical Engineering in 1965. He then went on to work on his Master's degree. During his time at the University, Hugo worked for the Upper Air Research Laboratory at the University. Hugo married Ann Catherine Hägg in the Salt Lake Temple on December 20, 1963 and they had 5 sons and 1 daughter. In his family he made himself famous for the delicious spaghetti sauce he created. It became the standard Sunday dinner. He was an avid student of the Scriptures and loved to share his thoughts. He set the example as a righteous father. The family has lived in Utah and California and the last 39 years in Arizona. Hugo had a full life, serving in the church in many capacities, being a good husband and father, and using his gift as a design engineer in the Semiconductor and Robotics Industry. He played chess and tennis, and he wrote poems, but his hobby really was electronics. He eventually started his own successful consulting company. He worked till heart disease became a problem, and later Lewy Body Dementia. Hugo is preceded in death by his parents, son John, and grandsons Cardon and William. He is survived by his wife Ann; sons Nils (Emily), Lars (Barbara), Leif (Amy), Eric (Trina) and daughter Jenny Barnhart (Billy); his sisters, Linnea Ross (Jewell R.) and Solveig Thomas (Stephen); 18 living grandchildren and 6 great-grandchildren; and numerous other family members in United States and Sweden. The funeral will be held on Monday, January 17, 2022 - Visitation 9am and Funeral 10am, at the Keating chapel of the Church of Jesus Christ of Latter-day Saints, 2224 W Keating Avenue, Mesa, AZ 85202. Burial will be at the City of Mesa Cemetery 11am on Tuesday January 18, 2022 Join Zoom Meeting https://zoom.us/j/96650871844?pwd=blFRcFNyRk5XamI0cVJ4Qmx3ZGI0dz09 Meeting ID: 966 5087 1844 Passcode: 357801

The family of Fritz Hugo Johansson created this Life Tributes page to make it easy to share your memories.

Send flowers to the Johansson family.