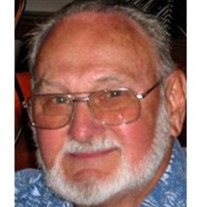 Frank Burdette Rickey, 91, of Mesa, Arizona left us surrounded by family on March 10, 2021 due to complications from Covid-19. Frank was born to Opal Ray Earls and Frank Delbert Rickey in Washington, Iowa. He served 6 years in the Coast Guard from May 1946 to October 1952. While in the Coast Guard he was promoted to Chief Electrical Technician and retired from the service with the rank of Chief Petty Officer. He was stationed on the ship Winona and the ship Wachusett in Seattle, Washington and traveled to Hawaii and Japan. Frank met Wanda June Prince at the Methodist Church in downtown Mesa, Arizona and they were married there in 1955. He is survived by his wife Wanda Rickey, daughters Dawn Bolukbasi (Akif), Donna Gonzales (James) and Kendra Yost (Thomas), two grandsons Robert Yost, and Gregory Yost (Nicole). He graduated from Iowa State University in 1958 with a Bachelor of Science degree in Electrical Engineering. While he was a student at ISU, the faculty and students began building the Cyclone Computer. The Cyclone Computer was a room sized computer which weighed 5,000 pounds and contained over 2,700 vacuum tubes. Frank enjoyed this experience and told some interesting stories concerning this project. After graduating from college, he worked for General Electric and later for Honeywell in Phoenix until his retirement in 1993. Among his interests he was active in the Phoenix Breakfast Club for many years. Frank loved boating and he and Wanda were active members of the Phoenix Power Squadron, where he received his 50 years anniversary membership in 2017. He enjoyed many sailing trips in San Diego, Catalina Island, and the US Virgin Islands with his family. In retirement he was a founding member of “New Frontiers for Lifelong Learning”, started in 1995 at the auspices of Mesa Community College and now serves the entire East Valley. During his many years with New Frontiers, he especially loved teaching computer classes to his peers. He was currently enjoying his role as a facilitator for the “Coffee and Conversation” group where he loved to engage in discussions about current events. The group was very disappointed to suspend meetings due to Covid-19 in 2020. Frank was a kind hearted soul who loved his wife and family. He was also a very good handyman who could fix anything around the house. Frank will be fondly remembered and sorely missed by his family and friends. As Dad always said “Drive safe and have fun!” Due to Covid-19 a private service will be held.

Frank Burdette Rickey, 91, of Mesa, Arizona left us surrounded by family on March 10, 2021 due to complications from Covid-19. Frank was born to Opal Ray Earls and Frank Delbert Rickey in Washington, Iowa. He served 6 years in the Coast Guard... View Obituary & Service Information

The family of Frank Burdette Rickey created this Life Tributes page to make it easy to share your memories.

Send flowers to the Rickey family.